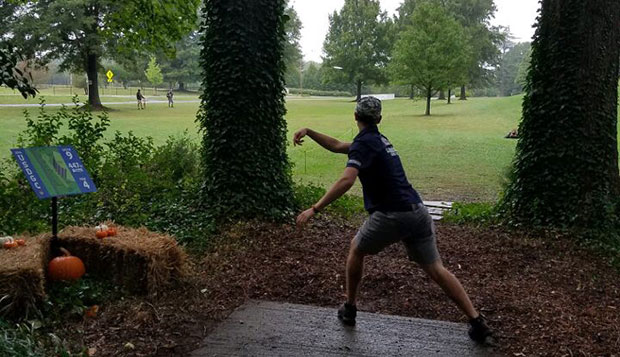 Liberty sophomore Hunter Thomas tees off during Friday's first round of the Dean's Cup before Hurricane Matthew arrived in Rock Hill, S.C.

Hurricane Matthew shortened the United States Disc Golf (USDG) National Championships from a four-day to a three-day tournament as wind and rain produced unplayable conditions for the 90-plus professionals on hand for the event held in Rock Hill, S.C.

Four members of Liberty University's disc golf team experienced a similar fate as competition in the Dean's Cup, one of the most prestigious events in Collegiate Disc Golf, was stopped early on Saturday with the Flames dueling with defending champion Augusta (Ga.) in the consolation final after losing to North Carolina State in Friday's first round.

"It was so rainy down there it was crazy," Liberty Head Coach Steve Bowman said, noting that the hotel they stayed at was full of evacuees from Myrtle Beach and Charleston, S.C. "The first day, we didn't play well at all. It was a pretty good downpour and our footing and the discs were getting wet. It was tough to get a grip on the disc with your hand."

The Flames teed off at 8 a.m. and, due to the rain, it took them four hours to play a course that would normally take two and a half hours to complete. On Saturday, they got through four holes of their consolation match against Augusta before being called off the course. The Wolfpack and Oregon only played two holes before their championship match was canceled.

"It was good to be invited, good for the guys to see all that, even if they only got to play one round," Bowman said. "It was an honor."

Meanwhile, in the professional tournament, Liberty senior Lance Brown placed 78th out of 87 players at 39-over-par 236 after three rounds of play.

"Most of the guys on the pro card were struggling, too," Bowman said of the USDG national championships that started on Wednesday. "They weren't shooting what they shot on the first two days. But it was good for Lance to be on that stage again. He has a one-year deal with Prodigy, so it'll be cool to have representation from Liberty playing on the pro circuit. He's excited for the year."

The Flames' and Lady Flames' collegiate players, meanwhile, are making preparations to host their only tournament of the year, the Nov. 5-6 Flamethrower Invitational, a national qualifier. NC State and Elizabethtown (Pa.) College have confirmed for the tournament, which will be played on Liberty's East Campus course on Saturday and on its new course near Hydaway Outdoor Recreation Center on Sunday.

Liberty's players (in red) pose with their Dean's Cup competitors under shelter on Saturday.