Lady Flames complete 11-1 sweep of Vermont, off to UMass 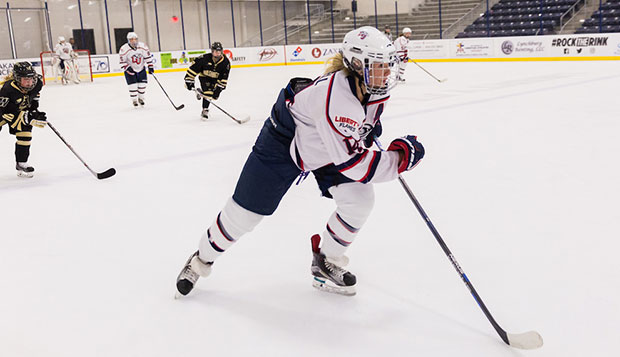 Liberty senior forward Catharine Burrell netted both of her goals in the third period of Friday night's 11-2 triumph.

"These type of games give us a chance to move people around," Lady Flames Head Coach Paul Bloomfield said. "We were able to mix and match lines."

Birney, who distributed three assists in the opener, started the scoring for the Lady Flames (2-3, No. 2 in the ACHA DI preseason rankings) just over four minutes after the opening faceoff, finishing a feed from junior forward Chelsey Greenwood, who netted a hat trick in Thursday's game. Jickling tallied her first goal just 42 seconds later off an assist from senior forward Catharine Burrell.

"Every game, we're getting more confident and able to move the puck a little better," Bloomfield said. "It's obvious, they're starting to read where each other is on the ice and chemistry is starting to happen."

Seven minutes into the second period, Liberty sophomore forward Lauren McDonald made it 3-0 with a score off an assist from freshman defenseman Emily John. Then, freshman defenseman Rachel Gibson netted her first goal as a Lady Flame off a pass from Jickling with 11:39 left in the period before Birley completed her hat trick with back-to-back scores within a span of a minute, both off McDonald assists.

Finally, in the third, Liberty added five more goals, including two on the power play, as Vermont was assessed all three of its penalties in the period. Jickling scored the first and last goals of the stanza, capping her hat trick off assists from Greenwood and Burrell, respectively, with the last coming with a man advantage. Burrell sandwiched two scores, set up by Gibson and Jickling, around John's first goal of her Lady Flames career, off a power-play assist from freshman forward Alex Smibert.

"Burrell was tearing it up," Bloomfield said.

Liberty outshot Vermont 40-20 for the contest and junior goalie Rosie Kelly made 19 saves, allowing just one goal to the ACHA rival Catamounts, midway through the second period.

"The goal they got on us was kind of a fluke thing, a bad bounce," Bloomfield said. "Rosie played well. They took a lot of shots on her and the girls played well in front of her, too."

A number of team members' families living in Canada drove down to see the Lady Flames in action on their fall break road trip.

"It was a good celebration tonight and they had some free time to spend together earlier today, when the weather was phenomenal," Bloomfield said. "I know it's raining down in Lynchburg, but it was gorgeous and 70 degrees here."

The Lady Flames, drove from Burlington, Vt., to Amherst, Mass., on Friday night, expecting to arrive at their hotel after midnight, less than 11 hours before they are set to face off against UMass in the morning. Bloomfield expects a much better challenge from the No. 6-ranked Minutewomen on their Olympic-sized rink.

"It's going to be a short night and UMass will be a stronger team," Bloomfield said. "They will be a little stiffer competition and we should be able to utilize some of the things we've been working on." 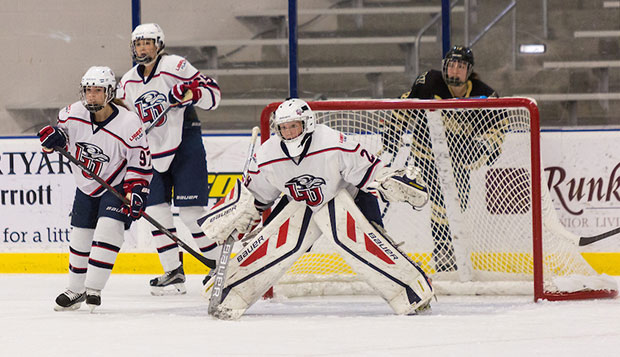 Junior goalie Rosie Kelly made 19 saves in a near shutout, allowing one second-period goal.