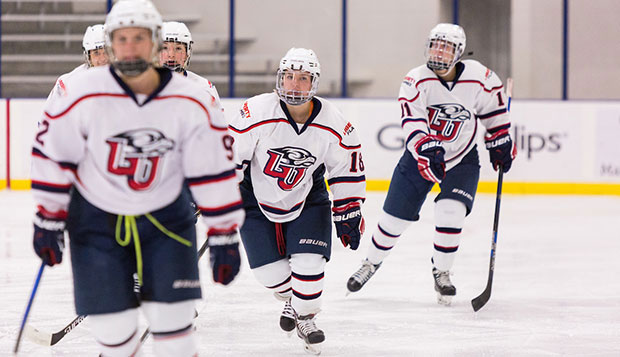 The Lady Flames (1-3), coming off 6-2 and 6-5 losses to the Washington Pride last weekend at the LaHaye Ice Center, started their fall break road trip with a lopsided win at Gutterson Fieldhouse, netting five goals in the first period and adding five more in the second to take a commanding 10-0 lead.

Freshman Nadia Rupoli started her first game in goal for Liberty and made 20 saves as the Lady Flames, No. 2 in the ACHA preseason rankings, outshot the Catamounts 64-21.

"It was good to get Nadia in goal and get her some confidence," Liberty Head Coach Paul Bloomfield said.

"There's good chemistry on that line and they're working well together," Bloomfield said of Birney, Greenfield, and McDonald.

After Jickling tallied her first goal off an assist from McDonald, Birney and Greenfield combined to set up McDonald's first goal with just under 10 minutes to go in the period.

Greenwood completed her hat trick five and a half minutes into the second period off Birney's third assist, extending Liberty's lead to 6-0. Junior forward C.J. Tipping capitalized on a feed from freshman forward Tiana Lisle just over two minutes later before Tipping set up Gilmour for a score.

Liberty ended the second period with two shorthanded goals within a minute's span with Vermont on a power play, the first by freshman forward Aly Morris unassisted and second by McDonald, off a fast-break feed from Greenwood. That stretched the Lady Flames' advantage to 10-0 with just under seven minutes to play in the period.

Jickling added an unassisted score with 5:40 remaining in the third before Vermont finally got on the scoreboard in the final two minutes of regulation.

"It was a good game and a great start (to ACHA play)," Bloomfield said. "We're getting some lines together now and we tried a lot of different things in the third period to get them working together. It just takes experience and time playing together, getting to know each other and figuring out what their strengths are."

The Lady Flames, who swept Vermont by 7-0 and 8-0 scores in their first games in the renovated LaHaye Ice Center last October, face the Catamounts in Friday's rematch at 7:30 p.m. before traveling two and a half hours to face sixth-ranked UMass in Boston, Saturday at 11 a.m.