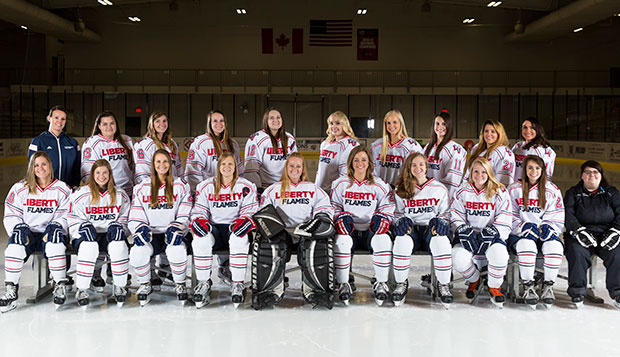 Fifth-year Head Coach Sara Niemi believes this year's model of the Liberty University ACHA Division II women's hockey team — with twice as many newcomers as returning skaters — will look much different and could experience much more success than those in previous seasons.

"We have 21 girls, so it's the biggest team we've had," Niemi said. "We're trying to get more ice time to figure out our lineup because we have so many new girls. It's very exciting, though. This is going to be our best team that we've had so far."

Besides a few talented new recruits, three forwards — seniors Nicole Douglas and Kjrstin Hoberg and sophomore Lauren Pillisch — dropped down from Liberty's DI squad. Six other returning students with hockey experience in Canada or the northern United States opted to try out for the first time.

Niemi said this is the first season Liberty's DII team will truly serve as a talent pool for the Lady Flames' DI squad to pull from as needed, with an even larger recruiting class already signed up for next year.

"It'll be good to be able to move players up and down, to make sure both teams are strong, competitive, and well balanced," she said.

With a month of practice under their belt, the Lady Flames are in mid-season game shape and excited to make their 20-game 2016-17 season debut this Saturday at 6 p.m. and Sunday at 11 a.m. in the LaHaye Ice Center against Miami of Ohio, a second-year DII program.

Liberty will again compete in College Hockey East (CHE), which added three new schools — Maryland, Pitt, and RIT — to become an eight-team conference this season. Those schools join Buffalo, Delaware, Navy, and West Chester, with the four teams with the best CHE records qualifying for the conference playoffs and the tournament champion earning an automatic bid to the March 15-19 ACHA DII National Championships in Columbus, Ohio.

The top six ranked teams in the final ACHA East and West regional polls will make the 12-team national tournament field. The Lady Flames are one of 22 teams in the East Region.

Niemi said Buffalo, Delaware, and West Chester, a national title contender the past three seasons, will be the CHE favorites while Liberty could battle Navy for the fourth playoff spot, as it did last year, narrowly missing the field.

"Our top line will take very good, hard shots and move the puck very well, too," Niemi said. "Our second line is going to be a very fast, powerful line. They've got a lot of speed and patience as well."