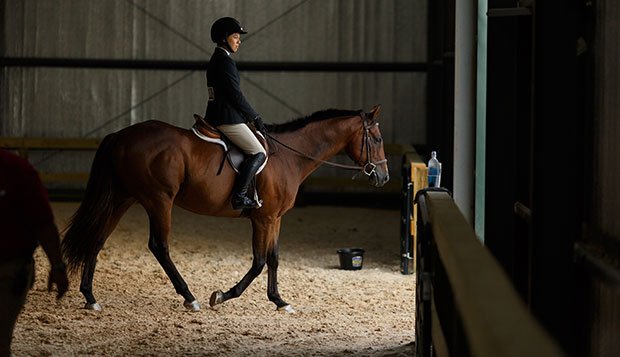 He interviewed Lady Flames riders from both disciplines as well as second-year Head Coach Jim Arrigon, who serves as director of the recently expanded Liberty Equestrian Center. Arrigon is complemented by a staff that includes Hunter Seat Coach Suzanne Flaig — a former assistant at Oklahoma State and Miami of Ohio (where she worked under Arrigon) who will start on Aug. 17 — and Hunter Seat Assistant Kimberly Counts as well as Western Coach Lauren Eagles.

The Lady Flames' Hunter Seat team won its IHSA Region 4 debut, a Sept. 24 show hosted by Richmond, after placing eighth in its national debut at the Tournament of Champions Preseason Classic. Liberty will next compete in an Oct. 22 show hosted by VCU.

"It's looking like a good year," Arrigon said. "We have a really good freshman class and we feel like we're in a good place where we can go in knowing we have a chance to be at the top of the pack. Whether we can win it or not, we will see."

Liberty's women's Western team opened with a third-place finish at a Region 5 show hosted by defending national champion St. Andrew's (N.C.) University and will next compete at a Nov. 5 regional event co-hosted by North Carolina State and Martin Community College in Williamston, N.C.

Kayla Sims, a senior Western rider, said the Lady Flames made a strong showing within their region last year, their first with a complete team.

"A lot of the teams that we're competing against have had experience for years and years and years," said. "They have built their programs up over a long period of time and we just started ours a few years ago for both the Western and the Hunt Seat teams. So the fact that we've come as far as we have in this short amount of time is really exciting for us and we're just looking forward to really improving and moving forward even more and becoming real competitors in this field."