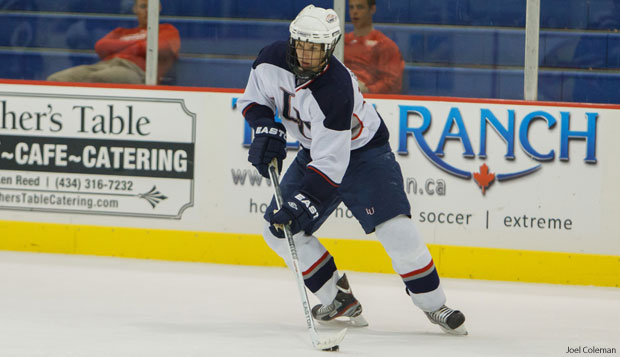 The Liberty Flames Division II men's hockey team took its first trip away from the LaHaye Ice Center Oct. 12-13, and picked up two dominating victories at the Raleigh Ice Center, 14-2 over East Carolina, and 14-3 over North Carolina State.

On Friday the Flames went up early on East Carolina with a pair of unassisted goals from Nate Arbour and Jeff Boschman. The Pirates scored on a power play late in the first and Liberty headed into the locker room up 2-1.

Caleb Allison put one in on a power play early in the second to put Liberty up 3-1, and Bobby Cervone added his first of the night 17 seconds later to make it 4-1. Brent Boschman added an unassisted goal to push the lead to 5-1, and the rout was on from there. Liberty scored 10 goals in the second period, including a hat trick from leading scorer Brad Docksteader to blow the game open. Cervone and Clinton Nigh each added goals in the third period to close out the victory.

Liberty outgunned the Pirates and finished with a 60-25 advantage in shots on the night. Nick Devine made his second start of the year and stopped 23 shots to earn the victory. Chris Stollings took the loss for ECU, allowing 10 goals in just over 30 minutes.

Liberty kept the momentum going on Saturday as they faced the N.C. State Wolfpack for the second time in four games. Liberty took a 9-5 decision in Lynchburg Oct. 6.

Docksteader opened the scoring early off a Jeff Boschman assist, then shared the wealth as he assisted on DJ Dinnison's first goal of the weekend midway through the period. Mike Reisland got the Wolfpack on the board with a power play goal, but John Cotton and Docksteader pushed the Flames' lead out to 4-1 with a pair of goals late in the period.

Liberty kept up the pressure as Lucas Ebel scored on the power play. After Mackie Hayman scored to cut the margin to 5-2, Brent Boschman and Docksteader scored to push the lead to five goals, 7-2. Chris Nelson scored for the Wolfpack late in the second, cutting Liberty's margin to 7-3 entering the third period.

The final period was all Liberty as they outscored NC State 7-0 on goals from Dinnison, Clinton Nigh, Brent Boschman, Jeff Boschman, and a pair from Docksteader to complete their third double-digit goal total in the last four games.

Trenton MacDonald picked up the victory for Liberty making 28 saves. The Flames outshot N.C. State 46-31 on the night.

The Flames return home on Friday night as they play host to the Elon Phoenix 10 p.m. at the LaHaye Ice Center.