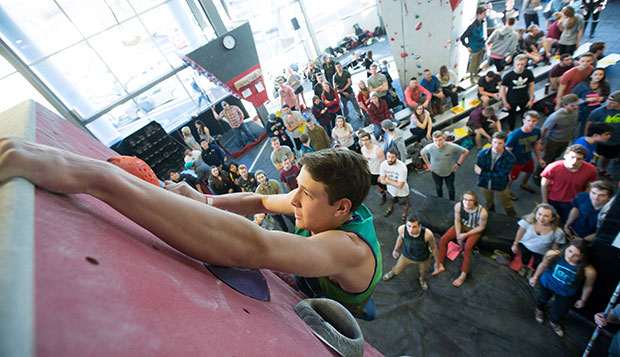 Close to 50 prospective rock climbers with varying degrees of experience tried out for Liberty University's first-year Club Sports teams on Sept. 19 and 21, when Head Coach Elliot Gaunt selected 28 student-athletes — 15 men and 13 women — to represent the Flames and Lady Flames.

"We were very excited with the turnout we had," Gaunt said. "Many of them showed a lot of promise and experience. Now, we are doing some training to get them closer to the level we would like to see them compete at."

Fourteen of the team members — seven men and seven women — will travel to Liberty's three competitions scheduled for this fall, with the remaining 14 team members comprising the developmental squads.

"There will be a tight competition within the team to claim the top seven travel spots," Gaunt said.

The Flames and Lady Flames started practicing on Monday and are gearing up for an Oct. 22 American Bouldering Series (ABS) "Boulder Brawl" event in Midlothian, Va., sanctioned by USA Climbing. They will then travel to another ABS tournament, Oct. 29 in Manassas, Va., before competing in their first Collegiate Climbing Series (CCS) event, also under the auspices of USA Climbing, Nov. 4, at River Rock Climbing in Roanoke, Va.

The Flames' men's team features Tristan Landon, a junior from Maryland who has experience in outdoor climbing and has won the last two open competitions Liberty has held on its rock wall in the LaHaye Recreation & Fitness Center. It will also be led by Corey Messer, a senior from West Virginia who has climbed outdoors, and Sean Farney, a junior from the Lynchburg, Va., area who is one of the student setters and monitors at Liberty's rock wall.

"He has a lot of outdoor experience and he should do very well," Gaunt said of Farney. "He's very good all-around, at bouldering and in routes."

On the women's side, Angelica Fuller, a freshman from Connecticut, demonstrated tremendous talent at tryouts.

"She did a great job and excelled over everybody as our top-placed female," Gaunt said. "She's been on a competition team before so excited to have her experience."

She will be complemented by senior Taylor Cedeno, the second overall women's competitor at tryouts.

"She has done really well in our bouldering competitions the past couple years and has really dedicated herself to make the team," Gaunt said.

Haylynn Gaunt, a sophomore from Pennsylvania and Elliot's younger sister, also made the women's squad as the third-placed female.

"She has lots to learn and I'm excited to see her develop and get stronger as well," Elliot Gaunt said.

Liberty is one of 10 schools in the Capital region of the CCS (which covers Maryland, Pennsylvania, and Virginia) and one of five Virginia schools along with UVa, Virginia Tech, VCU, and William & Mary.

Following two spring open events, the team hopes to peak for the Capital regional tournament in late March in order to qualify for the USA Climbing national championships in Salt Lake City in late April. Both postseason events will be omnium competitions, with the top six men's and women's climbers scoring toward a team placing.

"We have a lot of developing to do, but for a first-year team, I think we're going to do really well," Gaunt said.

Liberty host its first bouldering competition of the semester, open to all students, at the rock wall from 4-11 p.m. on Oct. 14. Registration is $5 before competition day, when entry fees increase to $10.