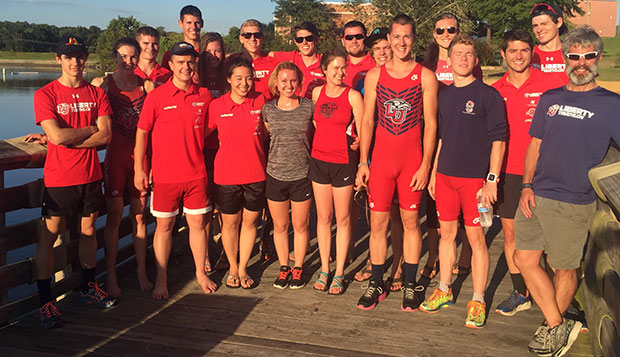 In what Liberty University Head Coach Parker Spencer called "the most successful day in Liberty triathlon history," the Flames rode a second-place showing from freshman Thomas Sonnery-Cottet and fifth-place finish from senior Megan Merryman to place third in both the men's and women's overall standings at Sunday's North Carolina State Championships draft-legal sprint triathlon in Greensboro.

Liberty put all four of its men's competitors in the top 10 and finished behind only Queens of Charlotte, N.C., and runner-up Navy, two Mid-Atlantic Collegiate Triathlon Conference (MACTC) rivals that came in second and ninth, respectively, at last April's USA Triathlon Collegiate National Championships in Clemson, S.C.

Sunday's race also served as a qualifier for the USA Triathlon NCAA women's collegiate regional championships, set for Nov. 5 in New Orleans, and Merryman put herself in contention to compete in that event by finishing fifth in 1:10:16.4, just 3:16 behind the overall winner from Queens, Tereza Zimovjanova.

"Only the 75 best female triathletes in the country get to go to that," Spencer said, noting that the NCAA women's triathlon director said Merryman has a 90 percent chance of qualifying, pending the results of next weekend's final regional qualifier.

Out of 30 men that started Sunday's sprint-distance draft-legal race — which featured 750-meter triangle swim in Lake Townsend followed by an 20-kilometer cycling stage on rural roads and an out-and-back 5K run through scenic Bryan Park — only 15 finished.

"The draft-legal events are very, very high energy and a lot of people get lapped out because it is a really competitive format," Spencer said. "We had more athletes finish than any other team, which was huge for us competing against the two top teams in our conference and two of the top teams in the country."

Sonnery-Cottet, a freshman from France, placed second individually for the Flames in 59 minutes, 25.9 seconds after a grueling duel with Graham Pimentel, the eventual champion from Queens who crossed the finish line in 59:22.7.

Sonnery-Cottet was the first triathlete out of the first transition area and wound up cycling against Pimentel and a Queens teammate who served as his domestic, allowing Pimentel to draft off of him.

"That was such a good race," Spencer said. "They kept attacking Thomas and he kept countering the attacks and stayed with them. They came off the bike running shoulder to shoulder and it ended up being a sprint finish at the end."

Sonnery-Cottet is currently in second place in the MACTC individual standings, just two points behind Marymount's Collin Chartier, who beat him at the Sept. 11 Patriots Sprint in Williamsburg, Va.

"She ended up in a group of girls who were really close to each other and that made for a really physical swim that slowed their times down," Spencer said. "She passed a ton of girls on the bike without drafting and then put down the fourth-fastest run split time in the whole race."

Merryman is now in a three-way tie for first in the MACTC women's points standings with Toria Sullivan from Georgetown and Jocelyn Bonney from Queens, the runner-up in Sunday's draft-legal race.

Liberty's men's and women's teams ranked third and fifth, respectively, out of 17 teams in the non-draft-legal race that preceded the men's and women's draft-legal events, starting at 8 a.m. The top four times from that race combined with the fastest triathlete in the draft-legal competition counted toward the overall team points total.

"Week by week, I'm watching our teams get faster and faster," Spencer said. "Their hard work is paying off and the amount of improvement is pretty incredible."

Liberty has less than two weeks to prepare to host the MACTC regional championships for the third year in a row at Smith Mountain Lake on Oct. 15.