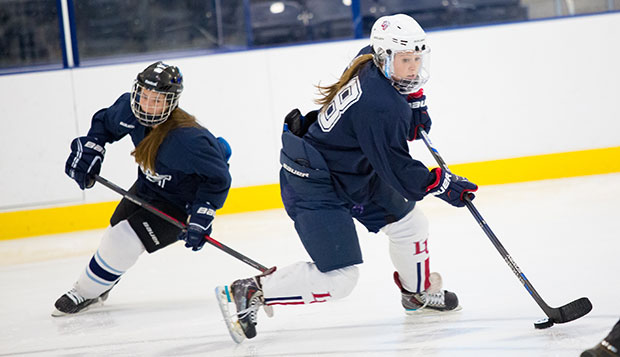 Liberty University's ACHA Division I women's hockey team got out to a rough second start to its season, Saturday night at the LaHaye Ice Center, giving up a goal in the opening 20 seconds of its first game against the Washington Pride 19-under squad, an eventual 6-2 setback.

After losing their exhibition opener Aug. 27 against the Hamilton Hawks, the Lady Flames (0-2) had trouble containing Veronika Pettey, who netted the first three goals for the Pride — one in the opening seconds off an assist from behind the net from Karrina Cave-Hawkins.

Soon after killing a penalty, the Lady Flames tied the contest at 1-1 with 15:26 left in the first period when senior forward Courtney Gilmour finished a feed from junior forward Chelsey Greenwood with a shot from in the left slot inside the right post.

However, just three minutes later, Pettey netted what proved to be the game-winner on a shorthanded breakaway shot lifted top shelf at the 12:24 mark. That came moments after Liberty senior forward and head captain Carrie Jickling had stolen the puck away from Chrissie Chavosy on another Washington breakaway earlier on the Lady Flames' power play.

Fourteen seconds into a Pride power play, with 8:28 still to go in the first period, Pettey completed her hat trick, beating Liberty junior goalie Rosie Kelly in the left crease to extend Washington's lead to 3-1.

Just over five minutes into in the second, Livi Hally pushed the Pride's edge to 4-1. Then, in the final minute and a half of the stanza, Kelly stopped Sophia Marra's initial shot on a breakaway but couldn't smother her follow as Marra kept digging at the puck and snuck it into the back of the cage.

Marra struck again on a four-on-three advantage in the third period, knocking the puck across the goal line from point-blank range on her second or third try to give Washington a commanding 6-1 lead.

With the teams back at even strength — four-on-four with just over five minutes left in regulation —Gilmour capped another fast-break assist from Greenwood with a backhanded shot in the left crease, slipping it under the pads of Washington goalie Giana Meloni for the final score.

Emily John, one of four freshman on a defensive unit that only features three returning players, said the Lady Flames will be eager for Sunday's 11 a.m. rematch back in the LaHaye Ice Center.

"There's still a lot of learning going on, but we were able to come together today and it was interesting to see everybody's different styles come together," she said. "It's all going to come down to communication (on Sunday). Everybody just needs to get comfortable talking together. We'll be back bright and early, ready to rebound."

John said besides the top line of graduate forward Catharine Burrell, Jickling, Greenwood, and Gilmour, which produced both goals, the freshman trio of Shelby Burden, Mackenzi Carroll, and Alyson Morris played well together as a first-time line combination.