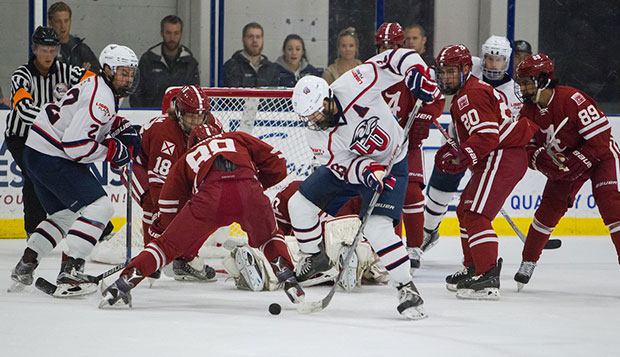 #Rocktherink was in full force early Saturday morning inside the LaHaye Ice Center as more than 4,000 fans packed the arena to watch No. 17-ranked Liberty University's ACHA Division I men's hockey team battle No. 24 Alabama in the first of this semester's two "Midnight Mayhem" matchups.

In a back-and-forth contest with only five penalties and no real fights, the Flames struck first when sophomore Colt Steele, positioned deep in the left circle, lifted a putback of a shot by freshman Josh Bergen from the right wing into the upper netting with 11:49 left in the first period. But the Crimson Tide rushed back in to tie the contest for the first of five times on the night three minutes later, on the game's only power play goal, when defenseman Pierre Ouellette set up at the top of the right circle and fired a shot past Flames sophomore goalie Blake Scott.

Taylor Joseph, Alabama's leading scorer, then lifted the Crimson Tide to its first of four leads before sophomore forward Zechariah Roberts tied it at 2-2 with 3:48 left in the opening period. Roberts received a pass from freshman defenseman Matt Cruickshank who had taken the puck from senior forward Grant Garvin on a breakaway through the left circle. He maneuvered around a defenseman sliding in front of him before depositing the puck top shelf past Alabama goalie John Grenier.

A controversial goal put the Crimson Tide back on top, 3-2, four minutes into the second period after a no call on an apparent trip by Alabama left Joseph wide open in the left circle for an easy finish. Less than five minutes later, Roberts netted the equalizer by first assisting and then tipping in sophomore defenseman Zane Schartz's shot from the top left circle. The deflection sent the puck past Grenier into the lower left corner of the cage.

"We had good net front presence when we were in the offensive zone," Schartz said. "I just saw the lane and shot it, closed my eyes and prayed it would go in somehow and it worked out."

For the third time on the night, Alabama struck back to reclaim the lead when Dylan Teed took a pass from Marc Demers from behind the net and put away a backhanded wrist shot for a 4-3 advantage.

The Flames knotted the score at 4-4 with 6:51 left in the second when senior defenseman and head captain Ben Hughes had his shot from the top of the right circle deflected down and into the back of the net by sophomore forward Owen Harris.

Fans got so fired up after that goal that they knocked a panel of the fiberglass boards loose onto the ice, stopping the action for more than five minutes.

"I've never seen that happen," Schartz said. "Obviously, we're super blessed with this rink and the midnight games are always on another level. We're just thankful for everything we have here and the fans that come out. It's honestly indescribable. I've never seen an environment like it. The fans are rowdy. They're wild. I love it."

Liberty seized its second lead early in the third period when sophomore defenseman Kyle Crane capitalized on a short feed from fellow freshman forward Andy Clarke and pocketed his shot from deep in the right crease.

However, the Crimson Tide netted the game's final three goals in a span of eight minutes midway through the third period to surge ahead. The equalizer came off the stick of Ouellette on a slap shot from the center blue line deflected past Scott before Jack Rooney converted the game-winner off defenseman Jonathan Lovorn's deflected pass through the right circle with 11:51 left in regulation.

Liberty killed a power play moments later before Alabama defenseman Casey Donegan's shot from the right circle skidded over the left foot of Scott into the lower right corner of the goal for the final score.

"We just had a couple breakdowns in the defensive zone," Schartz said. "We just need to bear down a little bit and focus more on the defensive side of the puck and offense will come. We need to focus on our transition game from a solid defensive zone and pushing it into the offensive zone."

The Flames ended the game on a power play, taking a six-on-four man advantage by pulling Scott for the final minute and a half, but couldn't cash in and suffered their first setback of the season.

"We had some good pressure," Handy said. "There wasn't any give-up. We have to play as a team. We played as individuals tonight, and it's not a recipe for success."

He said the Flames can definitely build on this loss and grow stronger as a team.

"As a coaching staff, we believe in the guys we've got in there," Handy said. "We have to learn from these situations and this is a great opportunity for us to learn early in the year. I have no doubt that our team will be better (in Saturday afternoon's rematch)."

The puck drops at 3 p.m. back in LaHaye, where students can see the Flames and Crimson Tide duel in the series' second game for free.