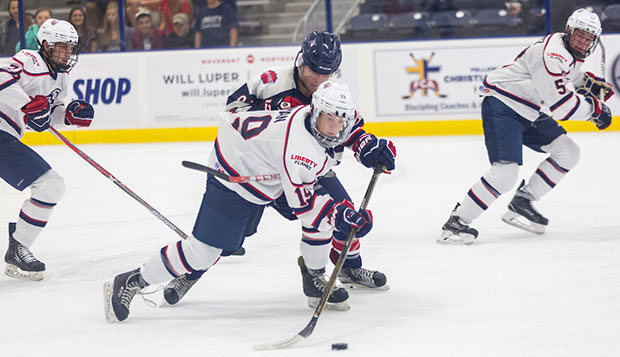 Liberty University's ACHA Division I men's hockey team opens play in its first season in the Eastern States Collegiate Hockey League (ESCHL) this Friday at 7 p.m. in the LaHaye Ice Center against West Chester (Pa.), the last-place team in the league in 2015-16 at 9-19 overall, 2-16 in ESCHL play.

The unranked Golden Rams are the first hurdle on a season-long road to the conference championship for the Flames, ranked No. 17 in this week's first regular-season ACHA DI computer poll. Liberty  anticipates greater challenges from No. 3-ranked defending ESCHL champion Stony Brook, No. 13 Delaware, and No. 20 Rutgers.

"There's a lot of excitement among our team and our program surrounding the ESCHL knowing that if we win the regular-season title, we get an autobid to the (ACHA Division I) National Championships," Liberty Head Coach Kirk Handy said. "We're looking forward to playing a meaningful game and are excited to see our team take the next step here."

Coming off a one-game weekend, their season-opening 4-1 exhibition conquest of the Richmond Generals before a near-capacity crowd last Friday night at home, the Flames will only have 17 hours to prepare for Saturday's 3 p.m. rematch with West Chester.

"It is going to be a real quick turnaround," Handy said. "Obviously, we're looking forward to that. As a team and as a program, we have to learn how to adjust our sleep schedule and be at the top of our game."

That will be good preparation for next weekend, when the Flames will host Alabama on Friday night in the first of two "Midnight Mayhem" contests of the semester before turning around and facing the Crimson Tide again approximately 12 hours later at 3 p.m. Saturday, Oct. 1.

Besides staying physically and mentally ready to play, Handy will look for his players to exercise more restraint and self-control in this weekend's series against the Golden Rams. The season opener against the Generals was plagued by 30 penalties between the two teams, resulting in three power-play goals (two for Liberty, one for Richmond).

"We need to be more disciplined," Handy said. "I like the way the guys played the game and competed, but there were a handful of penalties that we need to eliminate from our game. The key is to be aggressive and to compete hard, but as much as we can to stay out of the penalty box."

Liberty scouting report: Still experimenting with line combinations, defensive tandems, and goalies, the Flames' coaching staff saw plenty of potential from the pool of talent it has to draw from in last week's opener. Handy is more concerned about refining his team than countering what the Golden Rams will bring to the table in the teams' first matchup in at least six seasons.

"We don't know a whole lot of what to expect from them, but from our standpoint, with 15 new players this year, we're still in the process of developing as a team," Handy said. "It's still early and we're still fooling around with the combinations to see who's going to play best together. We've made steady progression over the first two weeks and we're focusing on getting better and seeing our team grow."

Senior forward Grant Garvin, Liberty's top scorer last season, was named one of the ESCHL's three "Stars of the Week" after netting two of the Flames' four goals against the Generals. He scored on a putback of a shot by sophomore defenseman Zane Schartz to give Liberty a 2-0 lead before stretching it to 3-0 by finishing a cross-crease feed from Zechariah Roberts.

Flames senior forward and alternate captain Chase Harris will see his first action after sitting out the opener against Richmond with a hand injury.

In goal, Liberty senior Matt Pinel pitched a shutout in 30 minutes of play between the pipes before sophomore Blake Scott allowed just one goal — on a Richmond shot from the blue line that deflected off the stick of Schartz into the upper netting — over the final 30 minutes.

West Chester scouting report: The Golden Rams graduated their top three scorers from last season, and only three who racked up more than 20 points, so they will be debuting a new lineup and looking for leadership in their season- and ESCHL-opening series.

Coaches: Handy is in his 17th season as the Flames' head coach and has compiled an overall record of 347-153-25. The Golden Rams are led by third-year Head Coach Bill Swahl, who has posted a 16-44-2 mark through two seasons.