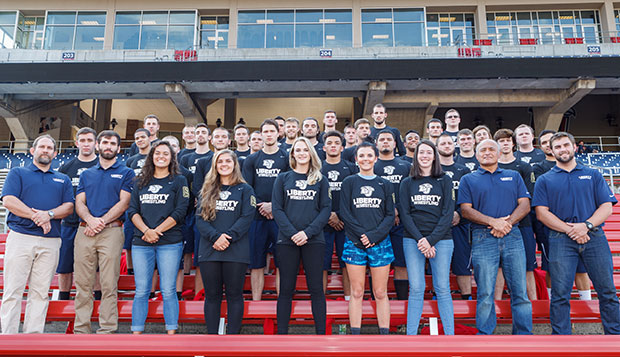 In early September, coaches, assistant staff, and the 32 members of Liberty's wrestling team posed for a group photograph in Williams Stadium, where the wrestlers did the bulk of their workouts during the weekend's 24-hour challenge.

Approximately half of the 32 members of Liberty University's wrestling team are newcomers this season. This past weekend, while receiving encouragement from upperclassmen suffering right alongside them, they were officially initiated into what has become a Flames fall tradition — the "Jacob's Challenge," a 24-hour workout that took place from 7 a.m. Saturday to 7 a.m. Sunday.

The exercises — ranging from technical drills and sparring sessions in the Wiseman Wrestling Room to weight training, running steps, and carrying sand bags up and down the hillside at 6 a.m. at nearby Williams Stadium — stretched the student-athletes to their physical and psychological limits. Between workouts, coaches and captains built the team up spiritually through periods of prayer and devotions.

"Otherwise, all we did was pretty much train," said Flames Head Coach Jesse Castro, who, along with Assistant Coaches Allen Hackmann and Chris Williamson, subjected the wrestlers to seemingly endless hours of drills and instruction, as well as a 12-minute, non-stop grind match. "They were flipping tires at around 2 a.m., running stadium steps for another hour, and doing dumbbell workouts out in the stadium, too, various activities like that."

New to the Jacob's Challenge regimen, wrestlers also showcased their versatility and tested their endurance by playing three hours of Ultimate Frisbee, beach volleyball, and football on the Liberty Mountain Intramural Complex fields and sand volleyball courts in the heat of the afternoon on Saturday.

"As competitive as these guys are, they were working pretty hard and the sun wore on them and affected them for the rest of the night," Castro said.

Due to limited availability of the football field, with the Flames hosting games this Saturday and on Oct. 1, the event took place two weeks earlier than in previous years.

"It was more taxing than normal," Castro said. "They didn't have those two weeks prior to train for this event. They were hurting."

Though seemingly detrimental at first, Castro has witnessed the long-term benefits of the grueling marathon of workouts in the past three training camps, extending well into the season, which starts this year at the Nov. 5 Messiah (Pa.) Invitational and Virginia Beach National Championships.

"It's always a test, and they were definitely beat up, but I think what they got from it was more mental preparedness as well as physical," Castro said. "It was probably counterproductive as a training regimen because of the wear and tear on their bodies, but now a two-hour practice seems like a breeze."

He was impressed by the willpower showed by freshmen and upperclassmen alike, pushing through the pain and adversity while sharpening one another's skills and encouraging and exhorting teammates.

"Seeing them take their bodies where they did and still be able to maintain a good attitude and support each other on the team (was inspiring)," Castro said. "It illustrates the importance of us as the body of Christ coming together as different parts and how we can use our gifts to build one another up."

The overall work ethic exhibited by his wrestlers has him excited about the upcoming season, when the Flames will host the National Collegiate Wrestling Association (NCWA) National Duals, Jan. 27-28 in the LaHaye Ice Center and contend for their second NCWA Grand National Championship in three seasons, March 9-11 in Allen, Texas.

"I am very optimistic and encouraged ... by our youngsters and even the enthusiasm of our returners," Castro said. "Whenever you're there together 24 hours like that under duress, there's a sense of adversity and the flesh comes out, so you've got to recognize that. Especially in the last hours, when we had a 15-20-minute break, trying to get them back into gear after that rest, that's when it was difficult. It was testing their mettle, but there's a bonding that subsequently emerges from that. By and large, they did a tremendous job."