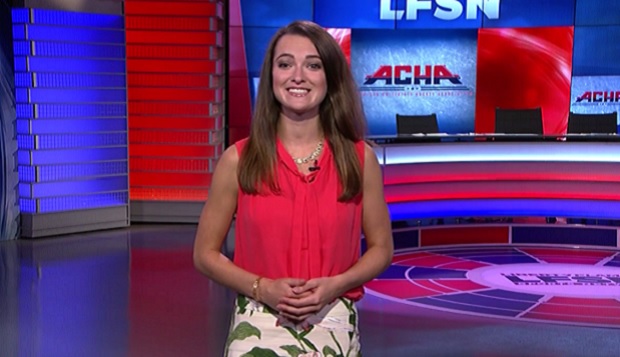 LFSN sideline reporter Monika McKenzie serves as host for both the ACHA DI men's and women's preseason shows, webcast live and tape-delayed through the Big South Network on Monday at 8 and 9 p.m., respectively.

For the fourth year in a row, the Liberty Flames Sports Network (LFSN) will stream a live ACHA Division I men's hockey Preseason Show to give fans across the country a glimpse of what they can expect in the next six months leading up to the March 9-14 ACHA National Championships in Columbus, Ohio.

Monika McKenzie, an LFSN sideline reporter, will serve as host for both shows, with the men's featuring a panel led by McGibbon with analysis from Club Sports Video Coordinator Patrick Strawn and Club Sports Hall of Fame inductee Dave Semenyna. They will break down the ACHA's DI top-25 preseason poll and offer predictions of champions in each of the league's six conferences, including the Eastern States Collegiate Hockey League (ESCHL), which Liberty joined this season.

"The show is designed to help promote the ACHA, and provide some good exposure for the league," Strawn said. "It sounds like all the players and coaches are looking forward to it."

Semenyna, who has projected multiple All-Rookie team players in previous preseason shows, and McKenzie will host a segment dealing with the top rookies to watch in the ACHA this season.

The show will air interviews with Rick Zombo, reigning ACHA DI Men's Coach of the Year from defending national champion Lindenwood, the top-ranked team in the preseason poll, and Matt Loughran, the ACHA's new vice president of marketing and communications and former New York Rangers director of team operations.

The second-annual women's show, hosted by McKenzie with commentary from Strawn and Joe Mixie, was produced by LFSN's Adrianna Scalzo and Ericka Woolfolk. It will discuss the ACHA DI women's preseason rankings and players to watch in the upcoming season, with each panelist offering their predictions of the teams that will make the Final Four of the ACHA DI National Championships, also to be played in Columbus, Ohio.