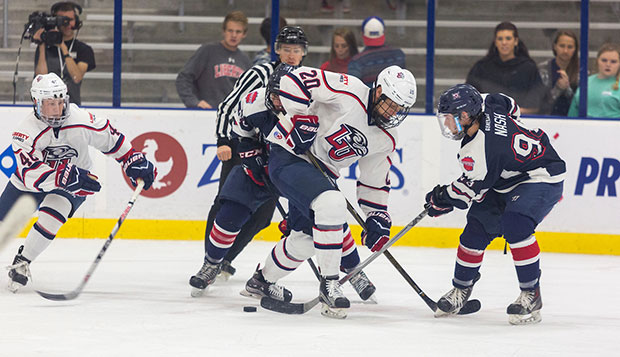 Excitement was in the air Friday night as Liberty University's ACHA Division I men's hockey team opened its season and introduced 15 new players in an exhibition game against the Richmond Generals' Junior "Elite" squad, a 4-1 victory played in front of a fired-up crowd at the LaHaye Ice Center.

"I was proud of the way our team was composed tonight," Flames Head Coach Kirk Handy said. "No one hit the panic button and we stuck with it, and that's a key thing for us, being able to play a mature game with such a young team."

While many freshmen made impressive debuts, it was the returning veterans who provided most of the scoring, led by senior wing Grant Garvin's two-goal second-period that put the Flames in control of the contest.

Garvin, Liberty's leading scorer last season, pushed its lead to 2-0 on a power-play rebound of a shot from the right circle off the stick of sophomore defenseman Zane Schartz, set up by senior defenseman Ben Hughes with 11:32 left.

Four and a half minutes later, with the teams playing 4-on-4 hockey, sophomore goalie Blake Scott blocked a one-on-one shot by Richmond's Tristan Hillebert, who had stolen the puck near mid-ice. The Flames quickly counterattacked with freshman defenseman Matt Cruickshank bouncing a short outlet pass along the right boards to sophomore forward Zechariah Roberts. He skated through the right circle and sent a beautiful cross-crease pass to Garvin who slammed it home for a 3-0 advantage.

Liberty allowed a fluke goal in the final 1.3 seconds of the second when Hillebert's wrist shot from the right side of the blue line deflected off Schartz's stick into the upper netting past Scott. But the Flames got it back in the third on a spectacular fast-break feed and finish from sophomore forward Zak Hayes to Schartz, who put the crossing pass away from point-blank range in the left of the net with 11:02 to go.

"Zane had a pretty strong game for us offensively," Handy said of Schartz. "He made some pretty solid plays and he had a nice goal where he jumped in the rush on that power play."

The Flames got on the scoreboard just three and a half minutes after the opening faceoff after sophomore forward Owen Harris won the puck on the back boards and slipped a wraparound shot from the right post off Generals goalie Zach Mains. Josh Bergen, who landed a few solid body checks throughout the contest, stuck the puck in off an assist from fellow freshman forward Andy Clarke.

"We came out flying, started playing the body right away," said Liberty senior forward Colt Steele, playing in his first game since having his season cut short by injury in the Flames' home-opener in their renovated rink last Oct. 23. "We took some dumb penalties, but it's the first game of the year, we've got a lot of new guys, so we'll learn from it and we'll be back playing smarter next weekend."

Richmond was whistled for 16 penalties to 14 for Liberty, which outshot the Generals 35-26 with senior starting goalie Matt Pinel making 11 saves and Scott adding 15.

"Defensively, we played pretty well," Handy said. "In our D zone, we have things to work on and we're going to improve on it, but it was a good start for our first game and we're in a good spot here where we can move forward knowing we've got some good foundational pieces in place here."

The Flames return to LaHaye next weekend for their Eastern States Collegiate Hockey League (ESCHL) series debut against West Chester (Pa.), with the puck dropping at 7 p.m. Friday and 3 p.m. Saturday.