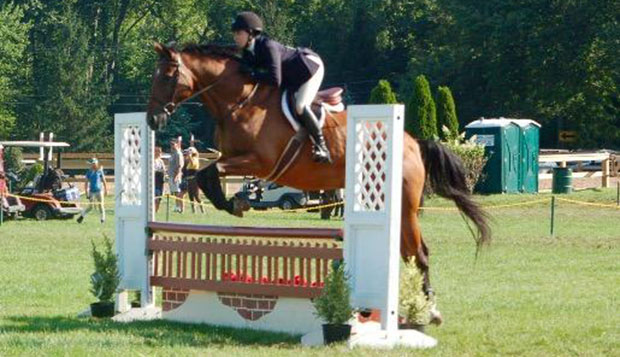 Liz Chenelle, a senior captain who has recovered from an injury that sidelined her for much of last season, will ride at Goucher.

The past year's expansion of the Liberty University Equestrian Center — from one 150- by 160-foot outdoor ring to two 300- by 120-foot rings (one indoor and one outdoor) — sets the stage for similar growth of the fledgling riding program.

"The Tournament of Champions will be our very first horse show on the national level to let our riders see what we're striving for," second-year Head Coach Jim Arrigon said. "We'll be competing against many of the best teams on the East Coast, so we'll be bringing our best rider in each division. We have lots of new people and will show big improvements this year."

One of if not the most gifted rider the Lady Flames have ever had on the roster is freshman April Simmonds from Ontario, Canada, who narrowly missed qualifying to represent her homeland at the Pan America Games during July trials for the Canadian Olympic team, advancing to the final eight out of 100 nominees.

However, her horse crashed and rolled in the final and Simmonds fell off, eliminating her from consideration. The horse, "Preston," was injured in the accident and Simmonds is boarding him at the Equestrian Center this semester as one of several new horses housed in new stalls now open in a second barn located across the indoor riding arena from the existing one.

"He's an Olympic-caliber horse, by far the most advanced horse we've ever had here," Arrigon said.

For the Hunter Seat regular season, which starts next Saturday at the University of Richmond, Liberty will be competing in a different region this year — Zone 4, Region 4 — against the host Spiders as well as Old Dominion, VCU, Mary Washington, the perennial champion, and others.

"It turned out good for us as we are in an easier region where we should be more competitive," Arrigon said. "I'm not sure if we'll be the champion, but we should finish in the top two or three."