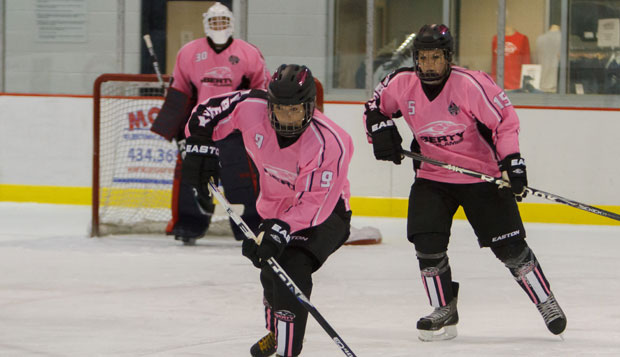 Carrie Jickling and Amanda Grainger each had a pair of goals as the Lady Flames Division I hockey team completed a sweep of the University of Vermont 5-0 on Friday night at the Gutterson Field House in Burlington.

The teams played a physical game for two periods, with neither team able to dent the scoreboard, but Liberty proving the aggressor of the two. Finally, early in the third, Carrie Jickling was about to find the net, and the floodgates opened soon thereafter. Grainger added a pair and Jenny MacArther closed things out as Liberty won its fourth straight game.

Kristina Toppazzini picked up her first career shutout in the victory, stopping all 11 shots from the Catamounts. Liberty outshot Vermont 44-11 on Friday night.

Autumn Kucharczyk scored off a faceoff with five seconds remaining as the Liberty defeated Vermont 3-2 on Thursday night at the Central Vermont Civic Center.

Vermont got on the scoreboard in the first period and held the lead into the second when Sarah Stevenson put one past Rosie Gluck to tie the game at 1. Stevenson would add another later in the second and Liberty would hold a 2-1 lead going into the final period.

Vermont would tie the game at 2 with six minutes to go and both teams furiously tried to break the deadlock. Liberty had a power play late in the game but could not convert. Moments later, Kucharczyk took a pass in the high slot and smashed it home past Gluck to give the Lady Flames a dramatic win.

Samantha Rupp went all 60 minutes for Liberty, garnering her second win of the season.

Liberty will be off on Saturday before heading to Boston to take on Northeastern University on Sunday. The Lady Flames will be looking for a measure of redemptions against the team that knocked them out of nationals last year and won the championship. The game is set for a 10 a.m. start.