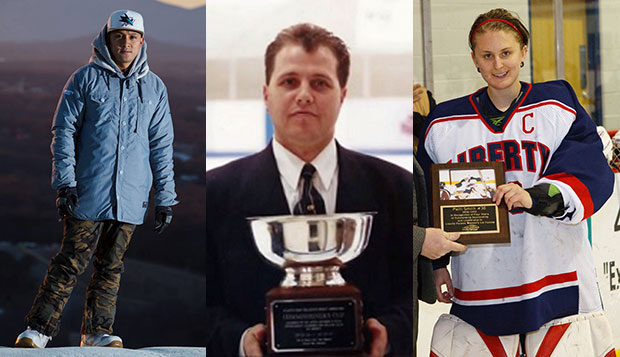 Lady Flames Division I hockey goalkeeper Patti Smith and Corrado Puglisi, who was hired as a student-head coach to help revive the men's hockey program after an idle 1994-95 season, will be in the three-member class honored at a Dec. 9 induction ceremony.

Kevin Manguiob, captain of the Flames' Ski & Snowboard team during its first two seasons (2009-11), who served on the coaching staff for the past five seasons, will be inducted as an athlete and team builder in his first year on the ballot.

(Athletes, coaches, and other honorees only become eligible five years after the conclusion of their careers as players, coaches, administrators, etc.)

Puglisi, from New Market, Ontario, north of Toronto, guided Liberty to an ACCHL championship in 1995-97 and to the playoffs three years in a row before stepping down in 1999.

He will join Dr. Gary Habermas, the Flames' first full-time head coach and a distinguished research professor in Liberty's Rawlings School of Divinity, who was inducted in the inaugural Hall of Fame Class of 2014.

Smith, the Lady Flames' first-ever recruited player and a four-year starter in goal from 2006 (the year the program started) to 2010, established program records that still stand for most wins (42) and minutes played in net.

She maintained a 94.0 save percentage throughout her career and helped Liberty finish ranked fourth, sixth, and fifth, respectively, in the ACHA Division I polls her last three seasons.

Manguiob was instrumental to the foundation of the Ski & Snowboard team the year Liberty Mountain Snowflex Centre opened in 2009, helping to build the program from the ground up and serving as a mentor to younger riders as his career progressed.

He and the Flames landed on the podium for top-three individual and team finishes in boardercross and slopestyle competitions at the United States Collegiate Ski & Snowboard Association (USCSA) National Championships seven times from 2009-11.

This year's induction ceremony will take place in the Hancock Welcome Center at 7 p.m., finishing just hours before the Flames' ACHA DI men's hockey team hosts its second "Midnight Mayhem" contest of the season in the LaHaye Ice Center.