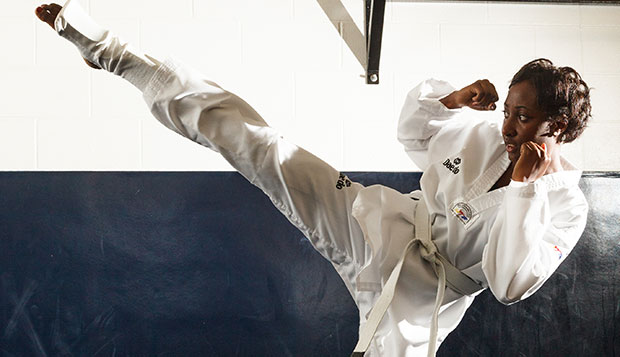 Tykeyah Henderson picked up tae kwon do at Liberty after previous experience in boxing and karate.

Henderson, from Neptune, N.J., learned how to box at a young age under supervision from her father before shifting to karate, a sport in which she earned several regional titles.

"When I got to high school, I decided to stop karate and just focus on my work more," she said. "I do regret that a lot, because it was very significant in my life. After that I attended community college and I didn't do any type of sport, but then I decided it was time to transfer, so I looked into Liberty University."

The move opened the door for Henderson to relaunch her martial arts career, and she has made the most of it.

"Although it was far from home, I found out that (Liberty) had tae kwon do. This was exciting for me because I hadn't fought in years, and I knew there was a reason God called me seven hours from home," she said.

Henderson captured a yellow belt title at the National Collegiate Taekwondo Association (NCTA) National Championships hosted by the University of Delaware in April of 2015. However, she hasn't let her success go to her head and is always looking for ways to glorify God and encourage others in their walk with Christ.

"For me, sharing the Gospel is more important to me than being a fighter," she said. "I don't know how far I'll get with tae kwon do, but I don't want to be known as just a great fighter, but a fighter who truly demonstrated the love and life of Jesus Christ."