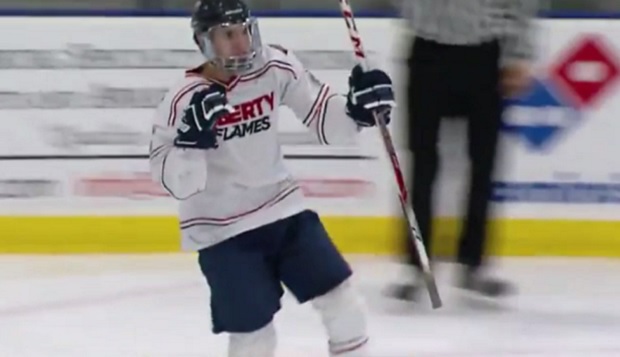 Liberty junior forward Jim Brady celebrates the game's final goal in the final two and a half minutes of the Flames' 5-3 triumph, Saturday at the LaHaye Ice Center.

Junior forward Jim Brady capped a counterattack by rocketing a slap shot from the top of the left circle under the crossbar with 2:24 to go in the third period for the final score. The Demon Deacons had closed to within one goal by tallying twice in the span of 30 seconds past Flames goalie Ruel Galang with four minutes remaining in regulation.

The Flames got goals from junior defenseman Sean Bakker, who played on Liberty's DII team last year, five minutes into the contest and Zack Mitchell, who pocketed a rebound in the left crease for a 2-0 lead with 25 seconds left in the first period.

Less than two minutes into the second period, sophomore defenseman Dylan Brown took a short pass from junior forward Jonathan Klakring and skated in from deep in the right circle before depositing the puck in the five-hole to pad Liberty's lead to 3-0.

Minutes after Wake Forest got on the scoreboard, and seconds after killing a Demon Deacons power play, Klakring extended Liberty's advantage to 4-1 with a putback from deep in the left crease off Drew Muir's shot from along the left boards.

The Flames will be back in action this weekend when they host Georgia, a top-10 DIII team in the South Region, Saturday at 6 p.m. and Sunday at 11 a.m. at LaHaye.