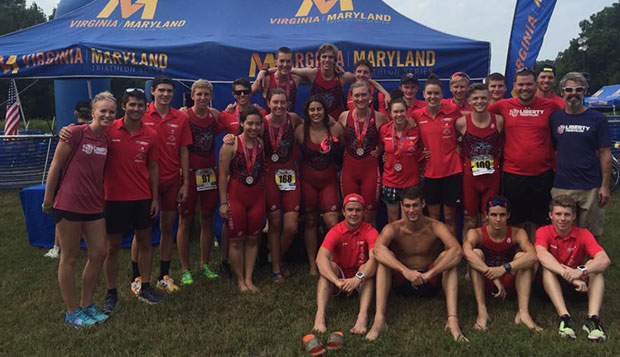 Merryman moved up rapidly from her 13:44 swim time which left her in 25th place among women by clocking the fastest time on the bike ride along the Colonial Parkway (33:44) and second-fastest time on the run (19:27). She crossed the finish line just 37 seconds after the overall winner, Jocelyn Bonney from Charlotte, N.C.

Liberty posted an even stronger overall showing in the men's race, finishing fourth among conference teams with Greg Schott placing 10th overall in 1:04:29. Thomas Sonnery-Cottet, a freshman from France and younger brother of women's cyclist Marie Sonnery-Cottet, finished 16th among collegiate athletes in 1:06:09 while Jake King, a sophomore cyclist competing in his first triathlon for Liberty, crossed the finish line 32nd in 1:10:36.

Liberty will next compete in the Sept. 24-25 Giant Acorn International, an Olympic-distance triathlon held at Lake Anna near Louisa, Va., before traveling to the Oct. 1-2 North Carolina State Championships in Greensboro, N.C., and hosting the Olympic-distance MACTC Conference and Mid-Atlantic Regional Championships on Oct. 15 at Smith Mountain Lake.