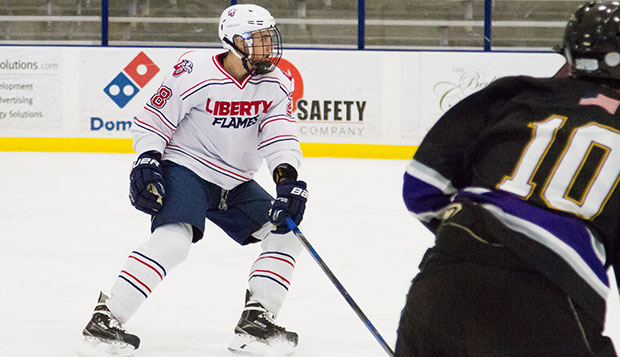 Senior forward Kade McDaniel is the Flames' top returning scorer from last season and will again play on the top line.

Though 70 percent — 18 out of 26 members — of this season's Liberty University ACHA Division III men's hockey team are either freshmen or sophomores, fifth-year Head Coach Rett McGibbon is hopeful that the Flames can get off to a faster start than they did last season.

Liberty lost its first five games and eight of its first 10 before rebounding to reach the South Region playoffs in Orlando, Fla., and ACHA DIII National Championships in Grand Rapids, Mich.

"Last year, we started a bit slow and this year, that's a possibility, too, with our youth," McGibbon said. "Once we get some more practices in and work on our systems and the freshmen get used to the pace and physicality of the college game … our goal is to take a step forward and make it to regionals for the second year in a row and to be a top-five team in the South and earn our way to nationals.

"When the Flames host Wake Forest, an ACHA Division II team, in Saturday's 1 p.m. season-opener at the LaHaye Ice Center, they won't be in mid-season form. But by the time the first ACHA DIII South Region poll is released on Nov. 10, Liberty will be battle-tested and McGibbon wouldn't be surprised to see it ranked in the top 10 again.

Liberty's 26-game schedule continues with a Sept. 17-18 home series against Georgia, another top-10 team in the South last season, and is highlighted by a Nov. 18-20 tournament in Florida with games against Central Florida, South Florida, and Florida Gulf Coast, the top-ranked team in the South.

"We have a lot of talent in the sophomore class, including (linemates) Jonathan Klakring, who had a fantastic freshman campaign at the center position, and Kyle Jassman, who gained some muscle over the summer and his maturity level has grown," McGibbon said. "(Jassman) looks like he's ready to take his game to another level."

McGibbon is glad to have Kade McDaniel, the Flames' leading goal scorer last season, back along with fellow senior forward Jeremy Martin. McDaniel will play on the same line as Evangelista, a centerman with good size (6-foot-2, 215 pounds) and strength, and freshman forward Bryce Meyer.

"Our top three lines are going to be really balanced and I'm excited about our fourth line this year," McGibbon said. "I think they'll be a group that can get the puck in deep and grind it out, wearing opponents' lines down."

In goal, McGibbon will have a trio of qualified candidates to choose from.

"We're very confident in all three of our goalies," he said. "Ruel Galang has been the most consistent so far and is our starter right now, but if Derek Guzik or Jake Petsch catch fire, they could take his place."

New this year, the ACHA will debut a weekly "D3 Power Play" podcast from 8-10 p.m. on Wednesday nights starting Sept. 14, with McGibbon one of four guests appearing on the inaugural show.