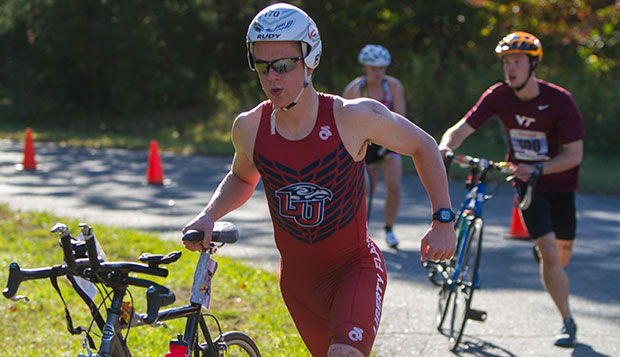 Travis Fehr returns for his junior season as one of the Flames' top five triathletes on a much-improved men's team.

Thirty-five members of Liberty University's men's and women's cycling and triathlon teams plunged into their fall training this past weekend with a camp that included a short swim in the James River and a grueling cycling climb and high-speed descent of Thunder Ridge — from the James River Visitor's Center to Apple Orchard and back on the Blue Ridge Parkway — on Saturday morning and concluded with a 4-10-mile run along Lynchburg's Blackwater Creek Trail and 40-mile cycling ride on Sunday.

"What an incredible way to start the collegiate school year," said Flames Head Coach Parker Spencer, who paddled alongside swimmers in a kayak on Saturday morning. "It was a beautiful, perfect day for it, and everyone said they had a blast. We have such an awesome group of hard-working student-athletes this year."

On the climb, those who reached the summit first turned around and encouraged the others to the top.

"It was cool to have a good team effort out there," Spencer said. "We were thankful to (cycling Assistant coaches) Van Phillips and Scotty Curlee for all they did this weekend. We are blessed to have such a strong coaching staff."

Liberty's triathlon teams will open their seasons Sunday at the Patriots Sprint in Williamsburg, Va., with a 750-meter swim in the Chesapeake Bay followed by relatively flat 20-kilometer cycling and 5K running stages.

"It will be a lot of these athletes' first chance to see the competition between the other schools and I'm excited to see them all compete," Spencer said. "We're going to surprise some people next weekend."

On Oct. 15, Spencer expects his teams to have their strongest showings to date at the Mid-Atlantic Collegiate Triathlon Conference (MACTC) and USA Triathlon Mid-Atlantic regional championships, an Olympic-distance race hosted by Liberty for the third straight year at Smith Mountain Lake.

Then, they will have nearly six months to get ready for the USA Triathlon National Championships, hosted by the University of Alabama.

Besides Joseph Anderson, a graduate student who has paced the Flames for the past four seasons, Spencer will look to newcomer Thomas Sonnery, a freshman from France, junior Travis Fehr, Sam Blackman, a freshman from Nashville, and Jake King, a sophomore studying in Liberty's online programs, to complement Anderson this fall.

"Travis is a World Championship qualifier in the half marathon and he's stronger than ever right now," Spencer said. "He's going to be one of our top guys and Sam Blackman is a freshman coming in with a strong swim, bike, and run and he's just putting it all together right now. He's only done a few triathlons, but I got to see him today take Thunder Ridge and swim open water and I know he can run from his times in high school, so his potential's really high."

King is competing in triathlon this season to cross-train for cycling, the sport he represented Liberty in at the USA Cycling Collegiate National Championships last spring, finishing fourth.

"Jake's just doing triathlon for fun, but he obviously has a lot of potential to be really fast," Spencer said.

On the women's side, senior Megan Merryman will be among the favorites to challenge for the MACTC regional title after placing fourth last fall.

"Megan should win it this year," Spencer said. "She joined our team with no triathlon experience whatsoever and now she should dominate the conference. Seeing a lot of these new girls come in that don't have any experience gets me excited as a coach to be able to develop them, just like we have with Megan."

Cycling team members won't have their first road race until February, but some may enter mountain bike or cyclocross events in the fall and winter months, respectively, "to get their competitive juices flowing and keep them engaged," Spencer said. "Mountain biking and cyclocross are great cross-training," as is triathlon. 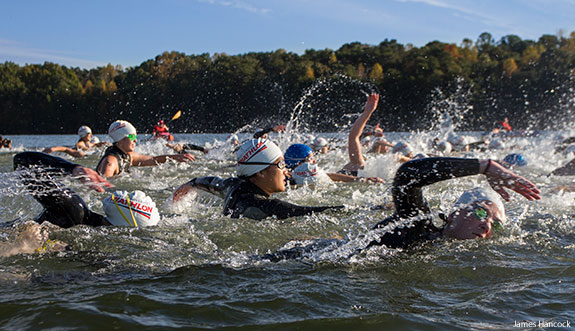