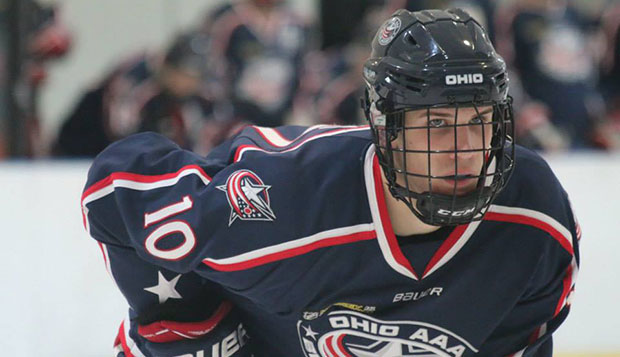 Marshal King gave up hockey for a season last year after God called him to start pursuit of a medical career.

King, 19, played forward for the Columbus (Ohio) AAA Blue Jackets as a senior in high school and considered continuing his pursuit of a junior hockey career, but instead opted to begin preparations to enter the medical field. God planted a seed in his heart to become an orthopedic pediatric surgeon and fueled that desire on a medical mission trip to Africa last summer, when he worked in orphanages and a hospital.

"That's a big part of my heart, helping those in need," King said. "I played in the Blue Jackets' organization for pretty much my whole life (but) God changed my plans and brought me here to Liberty. I gave up hockey and came in last year with 18 credit hours."

After completing his freshman year of pre-med courses, and marrying his high school sweetheart, Allanah, on July 23, King decided to give the sport another shot, and registered for Liberty's tryouts.

"Last year, I really missed not being about to go out and play and being part of that team atmosphere," King said, noting that his wife was supportive of his desire to join the Flames. "She wanted me to try out, and gave that encouragement to follow my passion so I decided to give it a go."

He was eager to showcase his speed, power, stick skills, and work ethic, which is what eventually impressed Liberty's coaching staff the most.

"I thought it was God's plan to be on the team and as the tryouts went on, I started to feel good about being able to win a spot," King said. "Now that I'm on the team, I'm so excited. I never knew I'd be back out on the ice again and to be able to represent the Flames, really neat to be playing the game I love for a school I love even more."

He approaches the game with the same focus as he has in the classroom, with a determination to get things done.

"My motto is ‘hard work is the only thing you can control,' so every day I try to go out and give it my best effort and to execute, whether it's in drills or games, scoring or making passes tape to tape," King said. "I want to be a top contributor. That's everyone's goal."

He said the sport prepared him well through his high school career to multi-task and maintain balance both on the ice and in life, between his school work (he was valedictorian of his high school class) and social circle as well as in his spiritual walk.

At 6-feet, 2-inches tall and 195 pounds, he brings an all-around game to the Flames' attack, which feature 15 forwards for a potential five-line rotation.

"I've got the size and strength to be a power forward and the shot and hands to be a goal scorer," King said. "I'm hoping to bring that (dual-threat playing style) out this year to be not a pure goal scorer or only a hard hitter. I don't want to be known as the bruiser on the team, but I want people to know I'm a hard worker."

King expects to assimilate into the team quickly and help the Flames strengthen bonds and develop chemistry. He is excited that Liberty has joined the Eastern States Collegiate Hockey League (ESCHL) this season, after being independent in the past, and the possibility of the Flames returning to the ACHA DI National Championships after missing them for only the second time in 10 seasons last winter.

"It's definitely a big change for Liberty how if you win the playoffs, you can get an automatic bid into nationals," King said. "We're going to have to go into battle every day so we can win in those little situations where you have to make a hit or win that race to the puck to score the goal that wins the game for you."

This season, for the first time, all five classifications of the ACHA playoffs will be played at the same location, King's hometown of Columbus, from March 9-19.