Liberty University looks all too promising for 2011 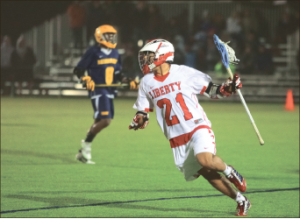 Liberty University in Lynchburg, Va has been hard at work for the 2011 lacrosse season. I went down to watch a fall ball game against Southern Virginia University and I was nearly in shock at how good this Liberty Team looked after reading that this was the first year lacrosse was even at existence at the school! After thoroughly watching the skill level of these players, I was almost convinced that a handful of these players had acquired NCAA College-level experience before their time at Liberty.

Michael Strappelli, a sophomore attackman for the Flames found the net three times and dished for four assists. Coming off of a splendid high school career in both Baltimore and out west in Spokane, Washington, I was able to catch up with him via email a week following the game. After looking at Sacred Heart University in Connecticut, Presbyterian College in South Carolina, and Canisius College in Buffalo, Michael told me he had found his home at Liberty due to the wonderful spiritual atmosphere that surrounded him. Michael was a member of MADLAX elite lacrosse club throughout high school and was also a member of the Fellowship of Christian Athletes National High School Team. With two years of knee injury at Fallston High School, Michael wasn't able to play for his school in his Sophomore and Junior Year. Following his move out west, Strappelli played his Senior year at Bonners Ferry High School in Northern Idaho where he made his mark by breaking his high school's record for points in a season. He followed up that summer playing for several club teams out of the Spokane (WA) region and the Couer D'Alene (ID) region where he received all-Pacific Northwest recognitions, MVP in the 2009 Space Needle Shootout, and PNLA Preseason All-American status in 2009.

Head coach Kyle McQuillan took the coaching job in the spring of 2010 and has the program looking promising in the SELC, a division two conference in the MCLA. Other high school standouts for the Flames are Kurt Tobias, a promising Freshman from the Northern Virginia area, Dan Baxley, former midfielder at Greenesboro College, Chris Armstrong, Goalie Shane Traynor, and long pole Dan Forbes. These guys looked like a promising team and I plan on keeping a close watch on them this upcoming season as they take the field this spring.
Men's Lacrosse Links
Schedule
Results