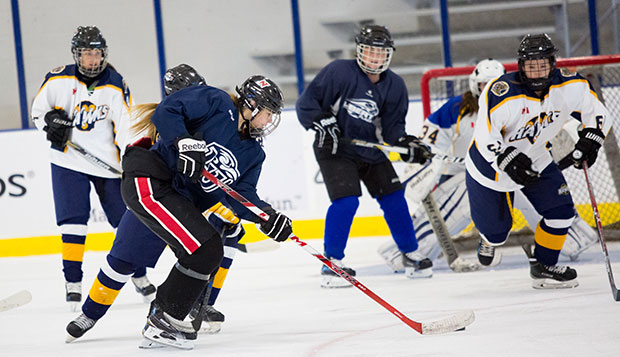 Liberty players battle for the puck during Saturday's exhibition game against the Hamilton Hawks at the LaHaye Ice Center.

Liberty University's ACHA Division I women's hockey team was the first Club Sports program in action for the Fall 2016 semester, even before the start of classes on Monday, with an exhibition game against the Hamilton (Ontario) Hawks Midget AA team on Saturday afternoon at the LaHaye Ice Center.

Most of the Lady Flames arrived on Thursday and only had two practices together and it showed as the Hawks, made up of high school-aged players, staged a 3-1 upset on Liberty's home ice.

"It was a good wake-up call," Lady Flames Assistant Coach Justin Forth said.

"We've only been on the ice two times and we haven't practiced any power play or penalty kill work at all," Liberty Head Coach Paul Bloomfield added. "We were disjointed whereas they've been working together for a month so they're starting to figure out lines. They've been skating and they're in shape whereas we're still trying to knock the rust off and get back into condition."

The early setback gives the Lady Flames (0-1) plenty to work on over the next four weeks before they play four more exhibition games in late September and early October.

"It was obviously not the result that we wanted, but at the same time, it was a good learning experience," Bloomfield said. "It didn't feel like our girls really played with a lot of fire in the hole, but it's too early (to judge). The nice thing about an exhibition game is everybody's going in the same direction and it gives us an opportunity to roll some lines and move some people around, to start figuring out who works well together."

Junior Rosie Kelly started in goal for the Lady Flames, giving up one goal in the first period and one more in the second before being relieved by freshman Nadia Rupoli, from Burlington Junior (Ontario), who allowed one more score over the final 30 minutes in net, including a scoreless third period.

"There was a little bit of a melee in front of the net and she didn't quit, she just kept digging," Bloomfield said. "It was chaotic. The puck was there and there were a lot of people around her. She just kept banging away at it until it finally went in."

Liberty will host two games against the Tri-City (N.C.) Selects on Sept. 24-25 and two more against the Washington Pride on Oct. 1-2 before opening ACHA Division I play over fall break with two games at Vermont on Oct. 6-7 and one at Massachusetts on Oct. 8.

"We've got some time," Bloomfield said. "I hate the result (against Hamilton), but the reality is we need these opportunities to get everybody going. We just need everybody here and to get focused. It's a matter of getting everybody on the same page working together."