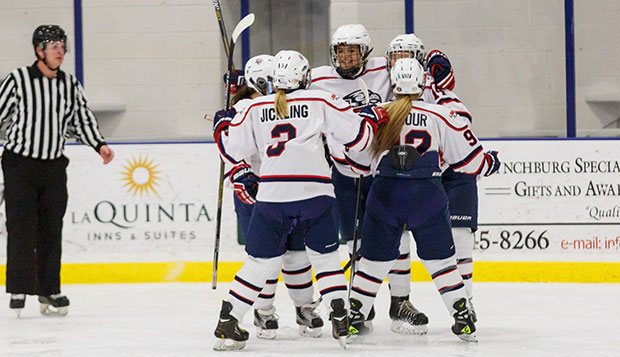 The Lady Flames have had plenty to celebrate in recent seasons, including the program's first ACHA DI national title in 2015.

Liberty University's ACHA Division I women's hockey team has reached the Final Four of the past four National Championship tournaments, capturing the first national title in Liberty Hockey history in 2015.

The Lady Flames were ranked No. 1 in the final four ACHA DI national polls last season before being edged in overtime in the semifinals by eventual champion Miami of Ohio, which also won it all in 2014. They should be among the favorites to claim their second crown in three seasons March 9-19 in Columbus, Ohio, site of all five ACHA National Championships.

"Hopefully, we'll bring home another title," senior forward Catharine Burrell said. "That's always been our goal. At the start of the season, you've got to start early and have a goal and work toward it and everybody's got to be on the same page. Hopefully, as leaders, we transmit our energy and our determination and we get the freshmen to understand how important this is."

Though their roster hasn't been finalized and they only held their first practice on Thursday, the Lady Flames open their 2016-17 season on Saturday with an exhibition game against the Hamilton (Ontario) Hawks' Midget AA team at 2:15 p.m. in the LaHaye Ice Center, where the Hawks have been practicing all week.

"We're on the ice (Thursday and Friday), trying to get something together so when we play Hamilton on Saturday, it will be fun to see everybody going the same direction," Liberty Head Coach Paul Bloomfield said. "It's going to be good to give us an opportunity to see who's who and where everybody is and go from there.

"We're going to move some lines around, just do a lot of experimenting," he added. "Obviously, we haven't had enough time to really get it together, so it's going to be a learning curve on Saturday, but I think the potential's here and I think the girls are ready for the competition."

Liberty features both a strong returning corps of veteran players and an influx of freshmen, giving Bloomfield a luxury he hasn't had in his 11 seasons at the helm.

"For the first time in my life, we've got a full bench, so it's pretty sweet," he said, noting the depth could take some adjustment time. "It'll bring new issues. We want everyone to play. If everybody can stay healthy and everybody stays on their game, we're going to have to change our philosophy a little bit because we've got extra people and I want to roll all four lines if we can."

"We've found a lot of success the last two or three years, so hopefully once the season gets rolling, that chemistry will pick up right where it left off and we can even be stronger this year than we have in the past," Jickling said. "Hopefully, everything lines up going into nationals and we have another strong run at the title."

"We definitely have a lot of depth this year, a lot more freshmen and they are all very talented," she said. "They'll all complement us and our chemistry will be very good this year. We'll all sort of balance each other out."

Bloomfield will use Saturday's contest as part of its tryout process for the Division I and II squads, which officially starts Monday at 9 p.m. with two more sessions on Tuesday and Wednesday at 4:45 p.m. All three tryouts are open to walk-ons as well as returning players and recruits.

He is eager to assess the strengths and weaknesses of the incoming players and to work with Assistant Coach Justin Forth to determine what role each may play.

"They're freshmen, so it's going to take a bit to get into the groove but I'm looking forward to seeing it," Bloomfield said. "We've got good talent, and it's not all the same kind of talent, so it's going to be our job to figure out how we can get some chemistry and players on the ice that will complement each other."

He would not be surprised if the Lady Flames retain the No. 1 ranking in the ACHA DI Preseason Poll when it is released in early September after they were ranked second behind Miami of Ohio in last season's preseason poll despite being the defending national champions.

"I think we've got the potential for a national championship team, but it will depend on how they come together," Bloomfield said. "It's just a matter of us working together making it happen."