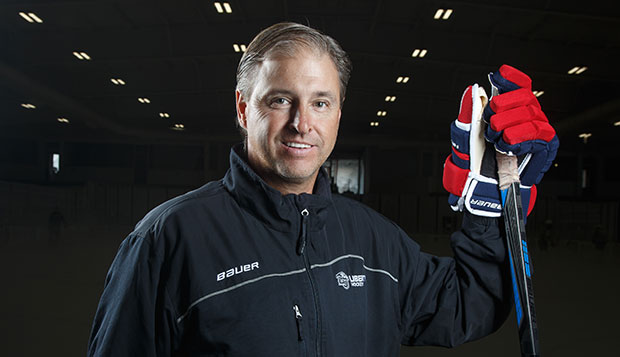 Berthiaume is entering his third season as an assistant for the Division I squad, working with the Flames' goalies.

"It's an unbelievable opportunity for him," Liberty ACHA DI Head Coach Kirk Handy said. "He's really excited about it."

Berthiaume, a Montreal native who runs a charter boat service on Smith Mountain Lake, started his NHL career in Winnipeg after being selected with the 60th pick in the 1985 NHL entry draft. He was notified Tuesday morning that he will represent the Jets in the alumni contest that will precede the Oct. 23 NHL Heritage Classic — the 2016-17 NHL season-opener between the current Winnipeg and Edmonton squads at Investors Group Field, home of the Canadian Football League's Blue Bombers.

"I was just coming out of the water from my charter when I got the call," Berthiaume said, noting that he was informed that he would play two of the three periods in goal for the Jets. "I'm looking forward to going back to Winnipeg. It's been a long time. Everybody's excited and looking forward to getting all the guys back together."

The Heritage Classic, which started in 2003 in Edmonton, will be the fourth in a series of NHL matchups played in outdoor arenas between Canadian teams. It has since been complemented by the Winter Classic, with eight outdoor contests played around New Year's Day in U.S. cities since 2008. Liberty Assistant Coach Marc-André Bourdon played in the fifth Winter Classic on Jan. 2, 2012, in Philadelphia, as a defenseman for the Flyers in a matchup with the New York Islanders.

This year's Heritage Classic is a showdown between two teams who dominated the World Hockey Association (WHA) before joining the NHL as expansion teams in 1979. Winnipeg was often the team to beat in the WHA before Edmonton became the NHL's powerhouse in the 1980s, winning five Stanley Cup trophies from 1984-90.

Berthiaume played with former Oiler great Wayne Gretzky on the Los Angeles Kings from 1990-92, and the Boston Bruins before concluding his NHL career with the expansion Ottawa Senators in 1994. He went on to play for 12 more seasons in various semi-professional leagues, including with the Roanoke Express of the ECHL from 1994-95 through 2001-2002, and was inducted into the ECHL Hall of Fame this past winter.

Berthiaume and his family, including his wife, Pamela, and three sons — Brett, 18, a freshman at Liberty this fall, and Beau (11), and Blake (8) — will be excited to be reunited with or introduced to several former teammates and opponents. At the top of that list is Gretzky, who Berthiaume played with in Los Angeles and against when he was with the Jets and Gretzky was in his prime with the Oilers.

"It's going to be a special event, a fun event," Berthiaume said. "When I told them about it, my two young ones were screaming, ‘We're going to meet Gretzky.'"

Berthiaume faces the daunting task of having to block shots from not only Gretzky, the NHL's all-time leading scorer (2,857 points), but also a couple other Edmonton scoring machines in Mark Messier, the NHL's second-leading all-time leader with 1,887 points, and Jari Kurri (1,398 points).

"I saw Mark Messier on TV the other night and he looked in great shape," Berthiaume said. "Everybody's going to be ready to go. I'm hoping I'm up to par. I've got to get on the ice every day. I'll work extremely hard and be ready to go, too."

Berthiaume, who will platoon in goal with former teammate Bobby Essensa opposite Edmonton greats Grant Fuhr and Billy Ranford, plans to work out in the LaHaye Ice Center with Liberty's goalies who he has been coaching in the offseason and leading into next week's tryouts, which start Sunday at 5 p.m.

"I played some last year at Liberty with the guys and I shouldn't be as rusty as I was then," he said. "I have a privilege to have a great team to work with at Liberty, a great chance to help the goaltenders here, and I'm going to gear up and get in good shape. You want to go there and look your best."

For now, Berthiaume is excited to start his second full season on the Flames' coaching staff, working with a strong influx of talent on the ice.

"Everybody was a little disappointed with the way things went last year, but we regrouped ourselves and we're really excited about the group we have coming in," Berthiaume said. "Everybody coming in is excited about being at Liberty and I think it's going to be an exciting season. It should be a fun year."