Brown places in top third of field at World Championships 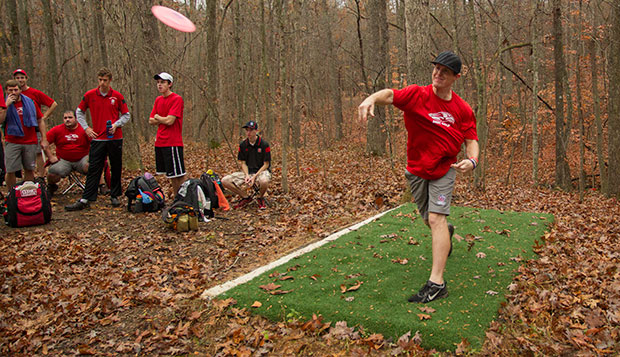 Lance Brown throws off the tee in a tournament on Liberty's newest course near the Hydaway Outdoors Recreation Center.

Playing in his first Professional Disc Golf Association (PDGA) World Championships tournament, Aug. 6-13 in Emporia, Kansas, Liberty University senior Lance Brown, who still has one class this fall to complete his degree, finished tied for 49th out of 157 players in the annual event.

Flames Head Coach Steve Bowman said it was quite an accomplishment for Brown, who plans to compete on the pro circuit full-time this fall, to be invited to the event and make the cut on his first try.

"This puts Lance one step closer to where he wanted to be this first year playing at the professional level," he said. "At this point, being connected to the sort of tournaments he's been playing for a year, this gives him a lot to build on."

A week after claiming the gold medal at the Virginia Commonwealth Games' disc golf tournament directed by Bowman and played on Liberty's two home courses, rising sophomore Hunter Thomas had the opportunity to serve as Brown's caddie.

"Hunter was on the course every day with Lance, carrying his bag and talking about his shots with him," Bowman said. "It was good for him to experience that and see it firsthand."

While at the World Championships, Bowman and Thomas participated in ministry opportunities with Eagles Wings Disc Golf, a mission team that Thomas and Brown traveled to Zambia with this past May.

"We had the chance to lead a chapel service and volunteered on the course two out of the four days," Bowman said, noting that there were a total of 17 people involved in the weeklong ministry, which included a family and youth disc golf clinic attended by 130 people at First Baptist Church of Emporia.

Brown will compete in more pro tournaments before the school year starts back up, one in Illinois and one in Ohio, including a qualifier for the United States Disc Golf Championships set for Oct. 5-8 in Rock Hill, S.C.