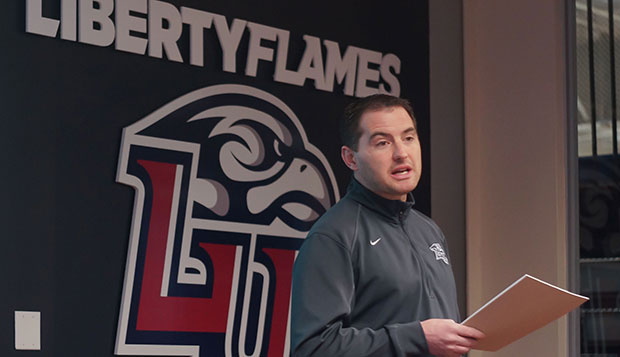 This video produced by Club Sports video coordinator Pat Strawn and narrated by Liberty Flames Sports Network (LFSN) anchor Rett McGibbon takes a look back at the 2015-2016 year in Club Sports, highlighting success stories in many of the 35 distinct men's and women's programs, more than 20 of which qualified for national competition.

"What we're modeling here is an athletic department from an NAIA or NCAA Division III athletic department model and taking it into a Club Sports model and really trying to create a unique environment," said Kirk Handy, Liberty's ACHA Division I men's head coach and Club Sports athletic director. "We've tried to use that as really the energy for driving this whole Club Sports initiative we've had here at Liberty since 2008. We've seen our Club Sports program start with six teams, 90 student-athletes to where we are now, 35 teams, 526 student-athletes, so it's been a tremendous growth, a real neat puzzle, and we're real privileged to be a part of this movement here at Liberty University."

Handy points out that Liberty is still the only ACHA program with hockey teams at all five classifications — Division I, II, and III men's and DI and II women. The video takes an in-depth look at the DII men's squad, which advanced to the championship game. For the second year in a row, it was one of three teams to qualify for ACHA National Championship tournaments.

"I've had the benefit of being able to be involved in Liberty Club Sports as a student-athlete as well as a member of the coaching staff for the lacrosse team," Zumpano said. "Being able to get that vantage point from both sides give you a better understanding of what the department has done and continues to do, continuing to champion a higher quality of experience that is really unrivaled."