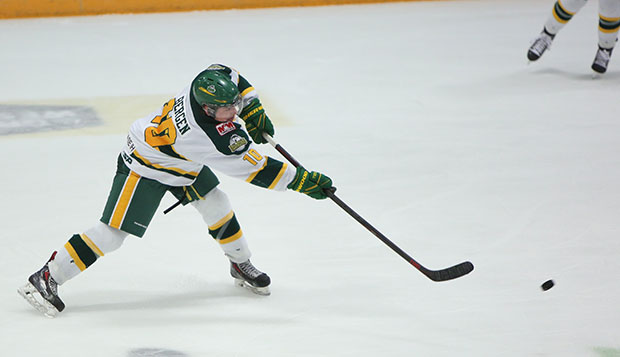 Joshua Bergen showcases his slap shot from the perimeter in a game with the Humboldt Broncos in the SJHL last season.

Coming from a rural farming community in Saskatchewan, Canada, Joshua Bergen is looking forward to the thrill of playing in front of spirited fans in the LaHaye Ice Center this fall as a freshman forward on Liberty University's ACHA Division I men's hockey team.

"I've heard they love the game of hockey down there and I'm really excited to play in front of the crowds that Head Coach Kirk Handy has been explaining to me," Bergen said. "It looks like a great atmosphere with lots of energy, for sure."

The former junior hockey player with the Humboldt Broncos of the Saskatchewan Junior Hockey League (SJHL) has yet to visit Lynchburg, Va., where he will join the Flames later this month. But he is confident he will make a smooth transition to the ACHA ranks.

"I'm expecting it to be a fast-paced game and I'm looking forward to the skill level, for sure," Bergen said. "It's nothing I'm not prepared for. As a forward, I feel able to get in and dig for the puck a little bit harder. I don't have to stay back and protect; I can go and attack."

He hasn't met his future teammates, but has played against incoming freshman defenseman Jacob Fricks when the Broncos faced off against Fricks and the Weyburn Red Wings in SJHL contests.

The 20-year-old, 5-foot, 10-inch, 194-pound freshman hopes to use his speed and physicality to make an immediate impact on the Flames' front lines.

"I'm overall very fast and I enjoy being physical and using my body to get the puck or make the hit to make the play," Bergen said. "I definitely want to be a physical presence that people will be able to notice, so they won't want to be around me because I'm going to knock them off the puck."

"We are excited to add Josh to our team," he said. "He has a high compete level and will bring a strong physical presence to our team."

Bergen expects to pick up Liberty's offensive systems quickly and be a positive influence on his peers.

"(Handy) wants to get into a physical style of play more, so I should be able to transition into that easily," Bergen said. "I want to be a team player and do the best I can to help the team progress and succeed. I definitely want to make sure that everyone is on their best game, to be there for the guys no matter what, and pick them up so they can continue to help the team as well."

Over the summer, Bergen has worked for his family's agricultural equipment manufacturing business while managing to stay in the best hockey shape possible through evening workouts five days per week.

At Liberty, he plans to study in the School of Business toward a degree in project management, which will equip him to become an expert in his field.

"I'm going in with options to expand into a leadership role in the business world, as an overseer," Bergen said. "I'm definitely following wherever God leads me. I would love to continue playing hockey for as long as I'm able, to go up in levels if that's a possibility. It just depends on what His plan is for me in the end, where I'll end up, whether it's in the hockey world or the business world."