Chung returns to bench as assistant coach with DIII men 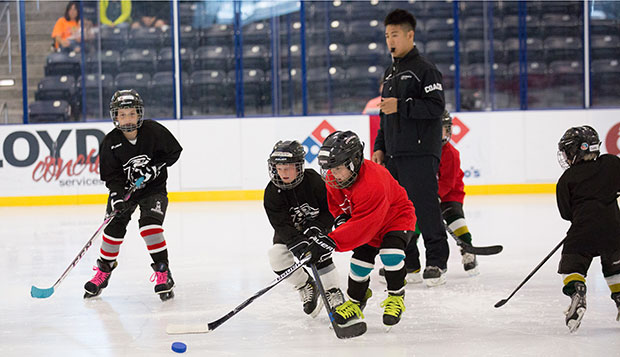 Johnathan Chung works with youth during the first of two summer hockey camps held at the LaHaye Ice Center.

Chung played on the DI men's squad through 2011 and coached on the DIII men's team under Tristan Chambers while starting his master's degree coursework in 2013-14. In 2014-15, he helped to guide Liberty's DI women's team to its first ACHA National Championship. He took last season off to start a doctorate in education, a degree he plans to finish this year before beginning a career as a professor.

"I'm excited to get back into the game and being able to combine my faith and the sport I love in a Christian environment," said Chung, who has volunteered with Liberty's youth hockey camps in recent summers. "I'll take it one season at a time, to see how things go and how God opens doors. Whatever capacity I can serve others in the hockey realm is what I'm going to do … to help train, develop, and guide each player to perform to their absolute potential."

McGibbon played goalie at the DII level for one season before graduating in 2008 and being named the inaugural DIII head coach in 2009. The LFSN sports anchor, entering his third year at the helm after taking two years off, broadcasted DI men's games during Chung's senior season, but never played or coached with him.

"I'm excited about having a guy with his wealth of hockey knowledge and also his Christian testimony," McGibbon said. "He played the game at a high level and along with his ability, he brings a lot of wisdom as far as getting the most out of two practices per week."

That will be especially critical early this season, with at least 18 of 26 players on the DIII roster incoming freshmen or returning sophomores.

"We're a really young team, but really skilled," McGibbon said. "Last year, we had a great class of incoming freshmen so this might be the strongest back-to-back years of recruits the program has had. Our final day of tryouts is Sept. 4 and our first game is Sept. 10, so we're going to have to hit the ground running and rely on returning players a lot for the first couple weeks."

McGibbon plans to utilize Chung in a variety of roles, including bench coach, assuring there are always at least three on hand for every game since Barber's availability is limited as a state police officer.

"He'll be there for the tryout process, selecting players, and when practices get going, I'll let him control the power play and formulate that and other aspects of the game, with a focus on specialty teams," McGibbon said.

The Flames will host Wake Forest in their Sept. 10 season opener and Georgia, ranked in the top 10 of the South Region last season, on Sept. 17-18, to jumpstart their longest season in program history. Their schedule will feature 26 regular-season games, including a tournament in Florida in late November with games against Central Florida, South Florida, and Florida Gulf Coast, the top-ranked team in the South.

After qualifying for the South Region playoffs for the third time in five seasons last winter and landing a first-ever bid into the ACHA DIII National Championships, McGibbon and Chung have greater expectations for this season.

"Our goal is to take a step forward and make it to regionals for the second year in a row and to be a top-five team in the South and earn our way to nationals," McGibbon said.

"And, hopefully, bring back another national championship," Chung added.