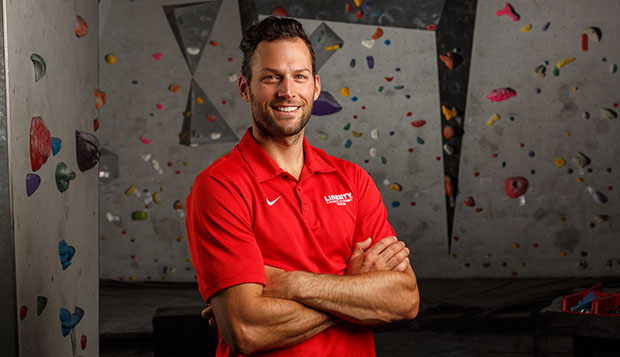 Though not yet in the Summer Olympics, rock climbing ranks among the fastest-growing sports in the world. Starting this fall, men's and women's rock climbing will debut as the 36th and 37th Club Sports programs at Liberty University.

"It's something we're going to hit the ground running with starting this fall," said Kyle McQuillan, head coach of Liberty's men's lacrosse team who also serves as assistant athletic director for Club Sports.

Elliot Gaunt, who graduated with a Bachelor of Science in Exercise Science in May and is planning to pursue a master's degree in sport management with a specialization in outdoor adventure this spring, will serve as head coach of both teams.

"We've been working on getting a team started for the last three years," said Gaunt, who had 150 students sign a petition saying that they would like to go out for the team if one was formed.

"Elliot was a big part of bringing the new rock wall to where it is on campus two years ago," McQuillan added. "He helped with the planning process and has a good understanding and experience in the sport so we thought that he was a good fit to take the team in a similar direction going into this new season."

Though Liberty's men's and women's travel squads will consist of only 15 to 20 members this first season, Gaunt plans to keep many more on developmental teams.

"It's really exciting to step out of my comfort zone and mentor students and further their knowledge in the sport and help them compete against other schools," he said. "I'm very much looking forward to see where it can go.

"Depending on where we're going, we'll probably take five to 10 of our top athletes to each competition," he added. "We're looking to be very competitive."

Gaunt, from Northern Pennsylvania, didn't start climbing until he arrived at Liberty as a freshman in 2009, but fell in love with the sport and started working as a student employee at the small rock wall located beside the basketball courts in the LaHaye Recreation and Fitness Center the following spring. He quickly ascended the ranks to serve as rock wall coordinator when the 40-foot climbing wall with 4,000 square feet of climbing surface area was completed as part of the facility's 67,000 square-foot expansion in 2014.

"Square footage-wise, it may be on a smaller scale compared to professional gyms, but compared to other schools, we have a great facility with our climbing all, top rope tower, and the whole bouldering area," Gaunt said.

The Flames and Lady Flames will be members of the Capital region of USA Climbing's Collegiate Climbing Series (CCS), which includes 10 schools from Maryland, Pennsylvania, and Virginia, including the University of Virginia, Virginia Tech, VCU, and William & Mary. They will compete in three different disciplines — bouldering, sport, and speed climbing.

The Flames and Lady Flames will use the rock wall in LaHaye as their home base and may host collegiate events on it in the near future.

"This first year, we probably won't host a competition, not until we get our feet under us," Gaunt said, noting that Liberty has held a bouldering event that has drawn approximately 80 participants every semester for the past five years and will continue to do so as well as hosting camps.

The teams do plan to travel to compete at five events in their first regular seasons, which start Oct. 1 and conclude March 4, before potentially qualifying for regional and national competitions in late March and April. Liberty can qualify individuals or complete teams to nationals, where team omnium champions are crowned in beginner, intermediate, and advanced divisions.

"They make it pretty simple to get to regionals, but the competition once you get to nationals is tough," Gaunt said, noting that Colorado State University and other schools in the Rocky Mountain as well as Northern California and Southern California regional members produce the most national champions.

Within its region, Virginia Tech may be the favorite, but Liberty seeks to put the Hokies and other area teams on the ropes starting this fall, after holding tryouts in early September.