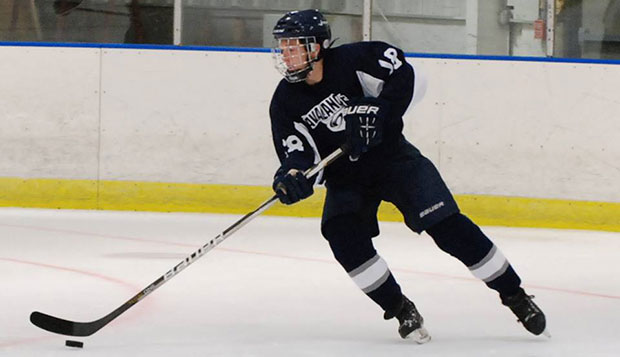 Quinn Ryan netted 12 goals and 29 assists for the North Jersey Avalanche of the Metropolitan Junior Hockey League in 2013-14.

Liberty University's ACHA Division I men's hockey team added another player with Fellowship of Christian Athletes (FCA) Hockey ties this fall when Quinn Ryan — a forward who played junior hockey for the past four seasons — committed to the program last Friday.

Ryan, 20, attended a Team FCA Select Camp near Buffalo, N.Y., two summers ago when he was introduced to Flames Associate Head Coach Jeff Boettger and former Assistant Coach Jake Hannon, now an FCA director in that area. He played against another incoming recruit, defenseman Jacob Fricks, during that camp and is looking forward to the challenge of working his way up through the Flames' offensive ranks.

"There's some pretty good talent there," said Ryan, who started playing hockey at the age of 5. "The kids I know are great hockey players so it's going to be exciting. I've been praying about it."

Though he is diminutive at 5-feet, 9-inches tall, 165 pounds, Ryan is a potent scorer and excellent playmaker on the ice. Last season, with the Eastern Hockey League's (EHL) Connecticut Nighthawks, he scored nine goals and distributed 19 assists in 30 games.

For a while, Ryan wasn't sure whether he would make hockey or soccer his dominant sport.

"My dad played soccer in college and I played both soccer and hockey growing up while my brother, who just graduated from Gordon College, played soccer," Ryan said. "I just like the faster pace and more physical nature of hockey. I like the finesse of the game. I'm pretty shifty and my style is more suited to playmaking than scoring. I like to think stickhandling is my strongpoint."

He is working to bulk up and increase his conditioning this summer in preparation for his first season of collegiate hockey.

"I'm just trying to be in the gym and stay on the ice as much as I can," Ryan said.

Off the ice, Ryan, whose parents are both teachers, plans to study in Liberty's School of Business and pursue a degree in marketing.

He never made a campus visit or attended a College For A Weekend (CFAW) event so Ryan will get his first look at Liberty when he arrives in Lynchburg, Va., for the Flames' preseason camp later this month.

He expects to be blown away by the Flames' home rink, the LaHaye Ice Center, which underwent a major renovation and expansion last summer.