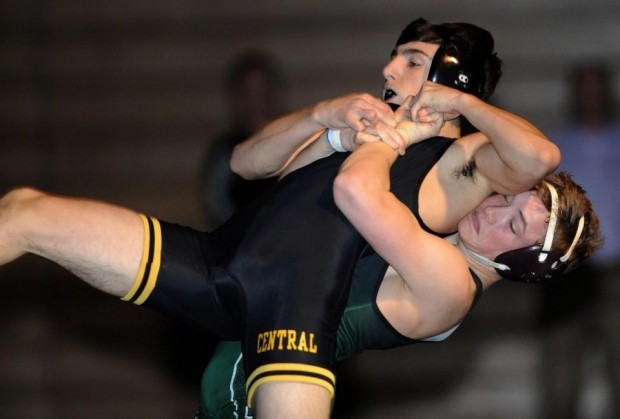 Riley Jacobson (bottom) from Massachusetts will give freshman Ashton Robinson a competitive sparring partner at 125 pounds.

Coming off a rebuilding season, Liberty University's wrestling team expects to be ready to challenge for National Collegiate Wrestling Association (NCWA) championships in 2016-17 thanks to a strong recruiting class.

After capturing both in 2014-15, the Flames hope to vie for team titles in the NCWA National Duals, which Liberty will host Jan. 27-28 at the LaHaye Ice Center, and the NCWA Grand Nationals in Kissimmee, Fla., set for early March.

In addition to elite student-athletes Ashton Robinson and TK Megonigal, Liberty Head Coach Jesse Castro has enlisted at least seven others with impressive wrestling résumés who will arrive in Lynchburg, Va., later this month.

"I think it's going to be a very strong class," Castro said. "It's going to put us in position to contend for a championship if we can get everyone in the right weight classes and come together as a team. We would be an underdog, for sure, but we have some talent there that can catapult us a lot closer than last season."

The Flames placed third in last winter's NCWA National Duals before finishing fourth at the NCWA Grand Nationals this past spring.

Overall, of the expected 35 team members, not counting walk-ons for tryouts in early September, half will be returnees and half will be newcomers.

"We recruited mainly middle weights and some lightweights, where was there was a dire need," Castro said. "We don't have a lot of heavyweights coming, but we're hoping to get Evan Cannady (an NCWA national championship runner-up at 235 pounds in 2015) back."

Incoming junior 165-pounder Pat Scarborough, who is transferring to Liberty after two years of community college in Pennsylvania, anticipates helping the Flames move back to the top of the NCWA ranks this season.

"I honestly think I'm going to win an NCWA title this year," said Scarborough, 20, who plans to continue complete a degree in Business Administration before get pursuing his MBA or a master's degree in Divinity or Theological Studies. "That's my expectation coming in. I'm going to give it my all. I know the team won national titles in 2015 and I'm trying to help bring that back."

Scarborough, who capped a 117-28 career at 152 pounds at Kennard-Dale High School in York, Pa., has plenty of experience sparring with NCAA wrestlers, including former teammate Chance Marsteller, who was ranked No. 1 in the nation at 165 pounds before going on to Oklahoma State University.

After taking two years off from the sport, recovering from knee injuries, he looks forward to developing bonds with Flames teammates such as senior 174-pounder Josh Ferenczy, junior 165-pounder Michael Bryant, and Megonigal, who will likely wrestle at 149.

"They all seem like pretty tough kids," Scarborough said. "I'm super excited to get back in it"

He will also be challenged by incoming freshman Logan Bosley, who took the past three years off after winning a 140-pound individual state title as a junior at Christiansburg (Va.) High in 2012, leading the Blue Demons — ranked second in the nation — to their 13th consecutive Virginia High School League team championship.

"Wrestling was consuming my life," he said. "I wasn't having any room to be a kid and got sick of the sport because of how much weight I had to cut to get down to 140."

Bosley underwent a spiritual transformation on March 23, when he committed his life to Jesus Christ.

"He got saved and he wants to be around people that are going to help him in his new faith," Castro said. "I'm excited about how the team can be used in his life and how God will use him within the team."

"He's not in good wrestling shape, but hopefully it's like riding a bike," Castro said. "We'll get him in shape."

Bosley has an athletic family heritage. His uncle, John West, who played basketball at Northern Kentucky University, is a distant relative of former NBA great Jerry West. His step-father played baseball at Radford University and his grandfather and father played football at West Virginia and Concord universities, respectively.

He plans to study psychology at Liberty and to become a mental health expert after graduating. But his main reason for choosing Liberty was the spiritual emphasis.

"I've definitely missed wrestling and I'm really excited to be back in it, but that's not my No. 1 priority," Bosley said. "I know I'll help the team and the younger wrestlers around me who have less experience, and I want to be a leader. But I want to go to Liberty because of the level of faith that's there. I can see a light in everybody I've talked to, who do the right thing every day. Sports is just an extra, a plus."

Bryant, Bosley, and Scarborough will battle with Luke Eli and Andrew Burgette, incoming freshmen who were regional and state qualifiers in Pennsylvania last season, for starting spots at 157 and 165 pounds.

Meanwhile, Megonigal will contend with Logan Via, a transfer from James Madison University and Messiah College, at 149 pounds and Ferenczy, last season's team MVP, will have a new sparring partner in Vince Levin, a 184-pounder from Ocean City, N.J., who spent two years in community college.

Another newcomer who will strengthen the Flames in the lower weight classes is Riley Jacobson out of Minnechaug (Mass.) High School, who will room with fellow 125-pound wrestler Robinson this fall.

Jacobson, who overcame an injury at the state tournament as a junior to eclipse the 100-win mark early in his senior season, committed to Liberty on Christmas Eve, 2015. He started wrestling at an early age at the encouragement of his father, who is involved in mixed martial arts (MMA). At Liberty, Jacobson plans to study international relations with a concentration in strategic intelligence before working for the Department of Homeland Security or the Central Intelligence Agency (CIA).