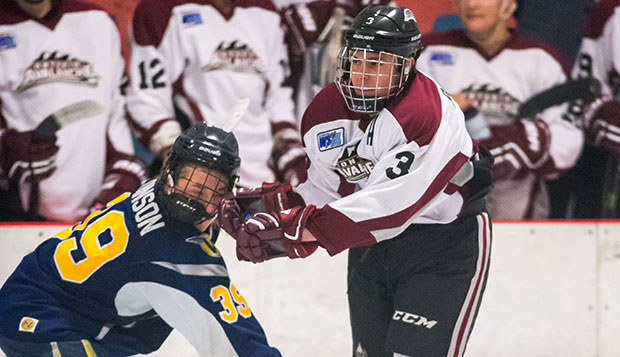 Basil Reynolds does not seek to avoid contact on the ice, as he shows on this check for the Ontario (Calif.) Avalanche.

Born and raised in Southern California, where he started playing roller hockey at the age of 7, incoming Liberty University ACHA Division I men's hockey transfer Basil Reynolds got a taste of hockey on the East Coast last season as a starting freshman defenseman at NCAA Division III Becker College (Mass.).

Before then, he spent two seasons in the Western States Hockey League, playing with the Ontario (Calif.) Avalanche. This offseason, he was torn between returning to Becker and transferring to Liberty, where he had attended the Flames' Hockey Recruitment Camp over College For A Weekend (CFAW) in early April. He opted to follow the same path as former Avalanche defensive linemate Drew Crilly, another Southern California native who is transferring from Becker.

"I thought about it and prayed about it every single day since school ended and I felt like God led me to Liberty," Reynolds said, noting that one phone conversation with Flames Head Coach Kirk Handy confirmed his decision.

"They have years of experience and I can pick their brains about anything," Reynolds said. "I'll see what they have to offer in terms of improving me as a player and a person — helpful tips from the paths that they've taken — and I'll try to apply them to mine."

He lives between Anaheim, Calif., and Los Angeles and grew up as a fan of the Mighty Ducks more than the Kings.

"My uncle had season tickets and he would take my brother and sister and I to Ducks' games," Reynolds said. "We'd get autographs from a couple players and souvenir pucks, which leaves a lasting memory."

He hopes to make a positive second impression on Liberty's coaching staff at the Aug. 28-Sept. 2 tryouts at the LaHaye Ice Center.

Reynolds will be one of five Californians on the Flames' DI roster, matching last season's total. He joins fellow incoming defensemen Crilly and Jacob Fricks, as well as sophomore forwards Zak Hayes and Zechariah Roberts.

Though he is a wiry defenseman — he stands 6 feet tall and weighs 166 pounds — Reynolds does not shy away from physical contact on the ice.

"People don't expect it, but I bring a big physical presence as well," he said, noting that he adapted to the contact playing at Becker and in the WSHL. "You have a lot less time and space. There's always someone on you and you're always expecting to get hit, every time you touch the puck. The only way to combat that is to do the hitting rather than getting hit."

He has an offensive edge to his game, after scoring 13 goals and distributing 15 assists in 39 games with the Avalanche in 2014-15, but takes a conservative approach when not on the power play.

"I love rushing the puck up the ice and getting scoring opportunities on the offensive side," he said. "If you get caught on offensive end, you're in a lot of trouble, so you've got to know when to take your chances and when not to."

He plans to major in sport management at Liberty with aspirations of becoming a general manager of a professional hockey team after graduation, if his pro career as a player doesn't pan out.

"I love the sport of hockey and am fascinated with the business side of it," Reynolds said. "I want to keep playing the game as long as I can and to remain around the game after that. I like to be able to put pieces together and see where they fit, to piece a championship team together."

He hopes to be able to contribute to the Flames' winning formula as a player over the next four years.

"On the ice, I hope to bring my scoring touch and physical presence to Liberty, and to be a part of the influence on my peers, leading by example both on and off the ice," Reynolds said.