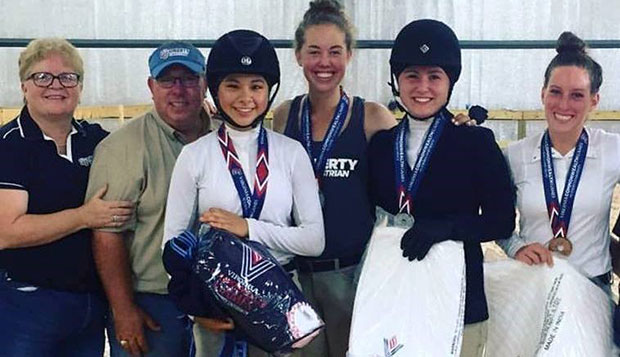 The show, which featured collegiate, youth, and open divisions in the Hunter Seat and Western disciplines of the sport, was sanctioned by the Virginia Horse Shows Association and the Southwest Virginia Hunter Jumper Association. It was one of more than 60 events in this year's Commonwealth Games, hosted and sponsored by Liberty.

"The local hunter/jumper community was supportive of the event, with about 50 horses showing up for the weekend," said Jim Arrigon, Liberty's executive director for equestrian programs. "Everyone left happy and said they would return again."

Pete Lampman, president of Virginia Amateur Sports, Inc., and the Commonwealth Games, presented awards for the two classic events. Among the spectators were the athletic directors for both Randolph College and Lynchburg College as well as Merrilee Wroten, director of the riding program at Sweet Briar College.

"It seems everyone wanted a look," Arrigon said.

Construction continues at the Liberty Equestrian Center, located in Campell County on the other side of Liberty Mountain from the main campus. There will be some follow-up work done on the indoor arena while structural progress is made on the new team barn next door. That facility, when finished on Sept. 1, will house 24 horses and include team locker rooms, a team meeting room, and workout and study space for the student-athletes.

Liberty's equestrian program will hold open tryouts for any full-time student from Aug. 30 through Sept. 2, and will begin practice the following week. Both teams open their seasons on Sept. 17, with the Western team traveling to St. Andrews University while the Hunter Seat team makes its debut in the national level Tournament of Champions event at Goucher College in Baltimore.