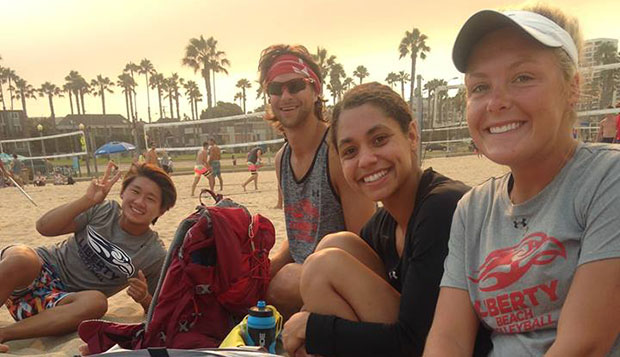 "I was really happy with their pool play," said Rachel Willis, Liberty beach volleyball head coach. "They defeated a tough Cal Poly SLO opponent whose players were Division I scholarship sand athletes. It was a close game, and they made big plays in clutch moments to finish it out 23-21."

In the first round of Gold Division playoffs, Liberty faced Long Beach State's Division I sand team in a single game to 28 and fell 21-28.

On the men's side, David Hong and Sam Eisbrenner went 2-3 in pool play, missing the Gold Division playoffs but taking second place in the Silver Division bracket. Assistant coach Kaleb VanDePerre and Nick Williamson had also qualified for the tournament but Williamson was unable to make the competition.

While in California, Liberty's players had the opportunity to learn from Olympic-level athletes. The women's players were able to train with former U.S. Olympic beach volleyball player Holly McPeak while the men had a workout session with 2000 Olympic gold medalist Eric Fonoimoana.

Back home in Virginia it was an all Liberty finals in the Commonwealth Games' women's beach volleyball tournament, with Lydia Smith and Brittany Tyree defeating Cali Anderson and Ashlyn Whitt for the championship. The men's tandem of Justin Bias and Paul Brueckner made it to the finals before losing to former Liberty players Mike Morrison and Ryan Culkin.