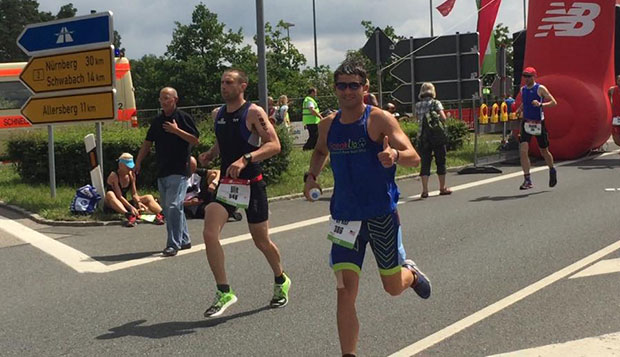 Parker Spencer starts out on the 26.2-mile run, the final phase of Sunday's Challenge Roth triathlon in Germany.

Competing as part of the "Speak Up" race team in support of the Cameron K. Gallagher Foundation, Liberty University men's and women's triathlon and cycling Head Coach Parker Spencer placed 326th out of 2,458 men's finishers in Sunday's Challenge Roth Triathlon in Germany.

"This course is known for being one of the fastest Iron-distance races in the world," Spencer said, noting that the overall winner set the Iron-distance world record by finishing in 7:35:39.

It is also one of the most prestigious triathlons in the world, drawing over 5,000 participants and 300,000 fans in the central German city south of Nuremberg. Spencer said it is on many triathletes' bucket lists.

"On the swim course, it's pretty awesome because there were hot air balloons floating above you all the way," Spencer said. "On parts of the bike, with so many spectators lining the course, only one bike can fit through at a time. The run finishes in a stadium they built specifically for the race, where fireworks are set off."

His main focus in completing the race was to raise awareness for the Cameron K. Gallagher Foundation, after meeting his goal of contributing $5,000 to the organization that supports the Children's Mental Health Resource Center.

The "Speak Up" team of 12 triathletes was assembled by David and Grace Gallagher, who Spencer met through Endorphin Fitness in Richmond, Va., where he works. They started the foundation in honor of their daughter who died at 16 after finishing the Shamrock Half Marathon in Virginia Beach.

Spencer's trip to Germany was his second European race of the summer after he competed in his fifth straight World Championship event, the June 5 ITU Duathlon Sprint Draft Legal Championship in Aviles, Spain. There, he finished 17th out of 37 finishers in the 25-29 male age division in 1:03:13 on a course that started with a 10-kilometer run, continued with a 40K cycling stage, and concluded with a 5K run.

"The duathlon was a lot of fun and definitely surprising how good the competition was there," said Spencer, who had previously completed ITU Age Group World Championship triathlons in New Zealand in 2012, London in 2013, Edmonton, Canada, in 2014, and Chicago last summer. "It was absolutely an incredible experience. After doing four years in a row of the triathlon championship, I thought I had a good understanding of what the competition looked like, but I was blown away by how fast they run there. You could definitely tell why the top triathletes in the world come from Spain. Out of 16 people that beat me, only four of them were from a country other than Spain.

He got out to a fast start in the 10K run despite having to fight his way through traffic.

"The starting line was really crammed," Spencer said. "I'm used to starting at the front, but everybody wanted to be the first guy on the line. The run times were much faster than what you'd see at a traditional triathlon. I came through the first mile at a 4:50 pace) and was in 30th place. It was a blessing to be able to compete at that level against people that talented." 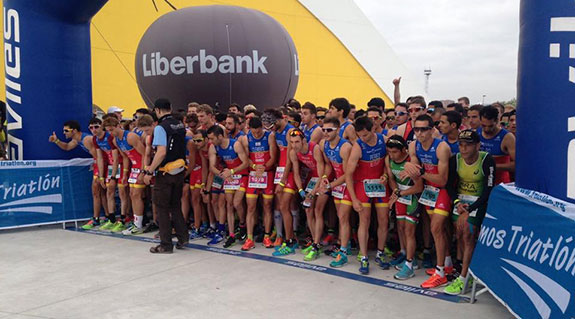 The starting line for the June 5 ITU Duathlon World Championships in Spain was tightly packed.