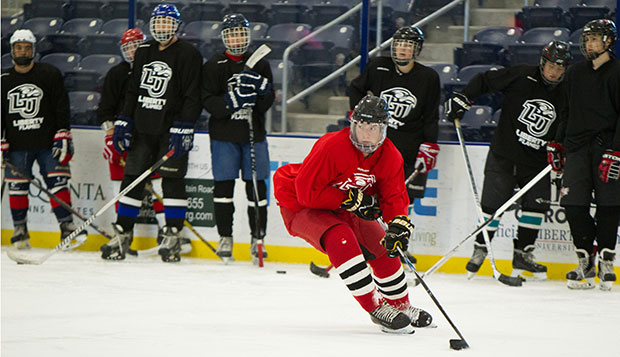 Since Friday, a total of 70 overnight campers have received quality instruction from Flames coaches and counselors while participating in exciting activities around Liberty's campus.

"I've enjoyed it. It's been fun," said Dakota Johnson, a rising high school freshman center from Sanford, N.C., near Raleigh. "The coaches definitely have a good range of skillsets to work with and they put it all to good use with the counselors, who are easy to learn from."

The three weeklong sessions started with a girls camp for all ages, featured on WFXR, during the first week of July and an elementary boys camp from July 8-12. Both drew better than 60 campers, but the middle to high school boys camp is the largest of the three. These are the first camps held in the LaHaye Ice Center since it underwent a major renovation last summer.

"We've got such a good group from Hampton, Richmond, Norfolk, and then Raleigh, Greensboro, and we've got a little group from Nashville, kind of all over," Liberty ACHA Division II men's hockey Head Coach Chris Lowes said. "The word's getting out and we're getting some pretty good response."

C.J. George, a rising high school senior who plays for the Junior Panthers hockey club near Miami, said the camp has immersed him in the hockey culture at Liberty, and inspired him to play for the Flames.

"It's been awesome," George said. "You're on the campus for a week and you get to come out here and practice and you're with the players and you get to stay in the dorms, so it's really cool because you get a little taste of what playing here would be like."

Liberty ACHA Division I men's Head Coach Kirk Handy said the level of talent among players participating in this week's camp is better than in any previous summer camp the Flames have hosted.

"We've got the best counselors on our staff, guys who invest in the kids," Lowes said. "It's good to see the guys get involved."

Lowes, who helped instruct the elementary-aged students in last week's boys hockey camp, has enjoyed the opportunity to work with budding young talent at a critical point in their development as players.

"It's been fun to get on the ice a bit and go back to your roots of kind of the fundamentals of hockey with guys who are really just learning the game," he said, noting that this week's camp is open to older kids, so the instructors can go into more depth in what they teach the players on the ice. "You've got guys that are going to play some junior hockey and potentially college hockey one day. They're in prime years, too, where they're going through growth spurts and you've got some big kids and guys that are developing at the top level."

Lowes said the camp focuses on the development of the whole person, including the spiritual side through chapels led by Liberty adjunct professor Brian Davidson.

"These guys are in such an important stage of their life so the impact of the off-ice has been good, too," Lowes said. "Liberty's such a perfect place to host a camp like this, with swimming (at the LaHaye Aquatics Center) and conditioning (at the LaHaye Recreation & Fitness Center) and Liberty Mountain Snowflex Centre. All the facilities are the best, so it's a pretty ideal situation."

On Monday night, the counselors and coaches played the older and younger campers in pick-up games, giving instructors a chance to interact with players who in turn had opportunities to showcase the skills they sharpened over the weekend.

"It's a great learning opportunity for the players, too," said Handy, who expects the camps to continue to grow in the future, after taking last summer off. "Next year, we'll see another large increase in our attendees. We could go to three groups instead of two and expand this one from 70 to 100 campers."