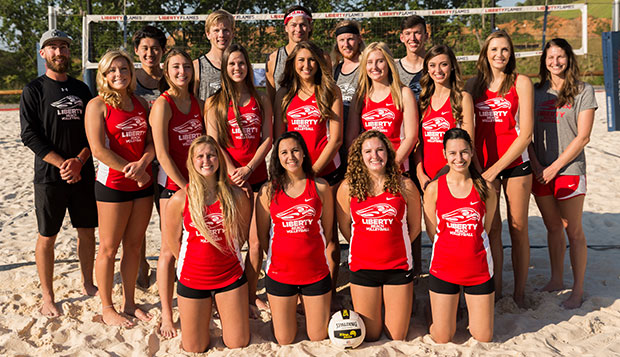 Members of Liberty University's beach volleyball team traveled to their final tournament in preparation for this Saturday's National Collegiate Sand Volleyball Association (NCSVA) Collegiate Nationals, Saturday in Wilmington, N.C., and returned with promising results, especially on the women's side.

Liberty Head Coach Rachel Willis said Horne and Wiese had specific objectives coming into the tournament to improve their play for this Saturday's nationals in Santa Monica, Calif.

"They were working on their communication and their composure under pressure situations," Willis said. "They were making decisions, and adjustments to what their opponents were doing, much faster. That's the goal."

Because both are relatively short players — Horne is 5-feet, 6-inches tall and Wiese, the tandem's blocker, is 5-4 — they must react quickly on defense to cover more of the court, like liberos in indoor volleyball.

"Using the system they did on Saturday is going to help them pick up a lot more balls (at nationals)," Willis said. "Karyl was pulling away from the block a lot faster and covering a lot of the short balls, which allowed Morgan to cover the deep balls. They're able to communicate who's ball it is and what each other's role is on each point."

After arriving in southern California on Wednesday morning, Morgan and Weise will have an opportunity to train with former United States Olympian Holly McPeak on Thursday and Friday, leading up to Saturday's tournament play.

Lydia Smith, a rising sophomore from Wilmington, placed fifth in the open division, playing with a friend from her hometown. Smith will rejoin rising junior Brittany Tyree to represent the Lady Flames in this Saturday's Virginia Commonwealth Games tournament, played on Liberty's East Campus courts.

In the A division, rising seniors Gabrielle Sunseri and Madison Malat went 4-0 to finish first in their pool before winning both of their playoff matches to capture the 10-team bracket title. Meanwhile, rising sophomores Madison Riley and Hannah Hyland struggled in pool play, going 1-3, before winning all three of their playoff matches to prevail in the loser's bracket.

Competing in the AA division, rising junior Cali Anderson and rising sophomore Ashlyn Whitt went 1-2 in pool play and were eliminated in the first round of the playoffs.

On the men's side, Flames pairs experienced similar fates, with the open division tandems of rising senior Sam Eisbrenner and graduate David Hong and graduate Paul Brueckner and rising junior Caleb Pitcher losing both of their matches in the double-elimination bracket.

"Sam and David were feeling the pressure and getting rattled," Willis said. "They were playing against a stronger level of competition than what they faced in Virginia Beach and didn't play as well. Everybody has a bad day, so it's good to get that out of the way so they can come back and play confidently going into nationals."

In the 12-team men's AA bracket, rising junior David Muller and Justin Bias recovered from a 1-2 performance in pool play to win two playoff matches and take the consolation bracket.

"They're both fairly new to beach volleyball and they played well together, showcasing how far they've come since they started playing in March," Willis said.

Eisbrenner and Hong will be one of two Liberty men's pairs competing at the NCSVA national championships along with assistant coach Kaleb VanDePerre, who placed third at last year's event, and former indoor player Nick Williamson, who lives in Redondo Beach, Calif., near Los Angeles.