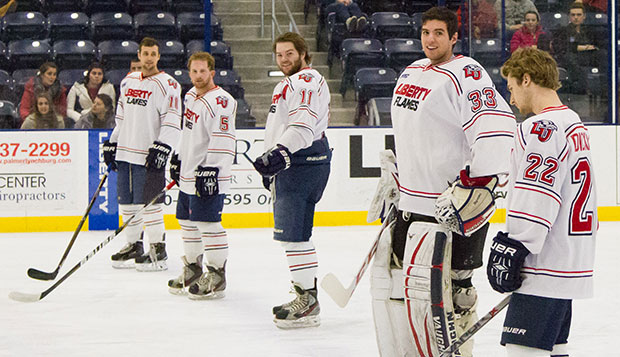 Video analysis has played a major role in preparing teams for opponents and correcting and improving individual techniques and performances for as long as video cameras have been around.

New technology has made that process easier for coaches to get more detailed looks at what their players are doing right and wrong and to instruct them in a timely manner, potentially changing the outcome of a game in progress.

In the seven years since it was introduced, XOS Digital's Thunder Hockey HD has become the most widely used video coaching platform on the market, with 21 NHL and multiple NCAA Division I coaching staffs using the program and internet-based app.

Starting this fall, Liberty University's ACHA Division I men's hockey team will introduce the software to its staff and team, with graduate assistant Carl Harter responsible for applying it to live game film and disseminating individual and positional highlights.

"It adds another level of professionalism to what we're doing," Flames Head Coach Kirk Handy said. "We're looking forward to taking this whole area of video analysis to the next level. I'm really excited about that. It's going to be a huge advantage to us. It'll be helpful for post-game and in-game analysis, especially at the end of every period, to give us great information about our team. We play back-to-back nights most weekends, so it will be helpful to make adjustments not only in-game but for the next night, too."

"The football team has been able to get the (halftime and post-game video clips) within 12 to 15 minutes," Harter said. "There are a lot heavier analytics with football. With hockey, the action is a lot more flowing. I'll have a 20-minute window to give coaches and players access to their individual clips from that game."

Harter, who served on Liberty's Club Sports staff last year — working under Event Supervisor Paul Brueckner in game operations for the DI men's team when he wasn't suiting up for his fifth season on the DIII men's squad — is thrilled about the possibilities of his new position.

"It's exciting to have this opportunity, and to start from scratch is a real blessing, to build something and see where it goes," said Harter, who graduated from Liberty with a B.A. in Sport Management in 2014 and is in his second year pursuing a master's degree in Sport Administration. "I've always had a passion for video projects. In high school, any sport I wasn't playing, I was the video guy, traveling with the team and helping them with film breakdown. It's nice to get back in and start my own video project, working with a great video staff."

When he completed his internship at the University of California Berkeley from 2014-15, Harter used a similar program to track UC's softball players after providing video of a number of their home games.

As a hockey player himself, Harter has a keen understanding of the game, which will help him anticipate action as he videotapes road games, and to identify and tag the Flames' players on live footage provided by the Liberty Flames Sports Network (LFSN) for all of Liberty's home games.

"It doesn't take a technical degree, but it does take a person with hockey experience, to know what they're doing," he said.

As a graduate video coordinator, Harter will not be designated as a coach, but he will coordinate his efforts with Handy, Associate Head Coach Jeff Boettger, and assistant coaches Marc-André Bourdon and Dan Berthiaume, who works with Liberty's goalies.

"They're going to tell me what they want to see," Harter said. "It's going to be great for the coaching staff, but I think it's going to be even better for the players, to get that visual feedback to them. Being able to visually learn instead of just hearing coaches say the same thing over and over again is very helpful for the players — to see the good that they do and the bad they do, to get feedback from their coaches, and to be able to learn from either situation."