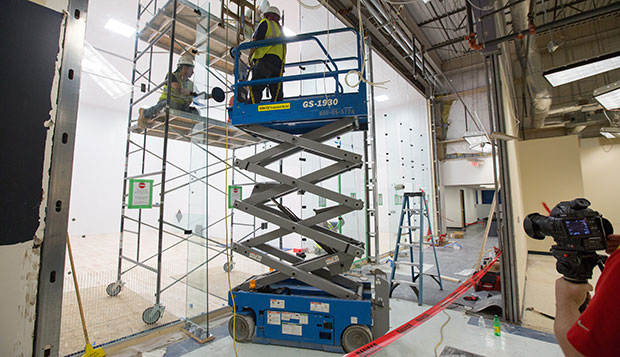 The panes for the glass back walls on the two new courts are installed on Thursday inside the LaHaye Student Union.

Liberty University's racquetball team, which has operated out of The Sports Racket in Lynchburg, Va., since it was introduced as the 30th Club Sports program in 2012, now has four on-campus courts in the LaHaye Recreation and Fitness Center to hold practices and small tournaments.

"We're excited about moving on campus," Liberty Head Coach Danny Rodriguez said. "Some players don't have transportation so this will make it easier for them to get to practice, and it should help with our recruiting efforts."

He said previously, many students were unaware Liberty offered men's and women's racquetball as two of its 35 Club Sports programs, but now the sport will have greater visibility.

"That's one of the pluses," Rodriquez said. "We'll be on campus so other kids will be able to see us practicing and realize there's a racquetball team and there'll be more students interested in racquetball."

The new courts, located next to the former post office, were completed this week and will be ready for use on July 20.

They are separated from the two existing courts by cardio and cycling studios, but are all in the same area, beyond the basketball courts from the main entrance to the LaHaye Recreation and Fitness Center. The facility will be much more spectator-friendly when a loft area above the new courts is completed before the start of the school year.

"The courts all have glass back walls and will also have overhead viewing, so people can watch from upstairs," Rodriguez said.

Liberty, which had a record-high six medalists at this year's national championships at Arizona State University in early April, has only seven returning players after graduation took a toll on its men's and women's teams. The Flames and Lady Flames — who had as many as 20 players in the programs' third season in 2014 — will hold tryouts the first week of September after setting up a tent at the Sept. 3 Block Party in an effort to attract newcomers to the sport.

"We'll train everybody, whether they're beginners or not," Rodriguez said of himself and former players Shawn Furman, Liberty's assistant coach who has played professionally, and 2015 graduate Jordan Kemp. "Anybody can play racquetball. We want to make sure everybody has the same basic technique, to make sure they're playing the right way."