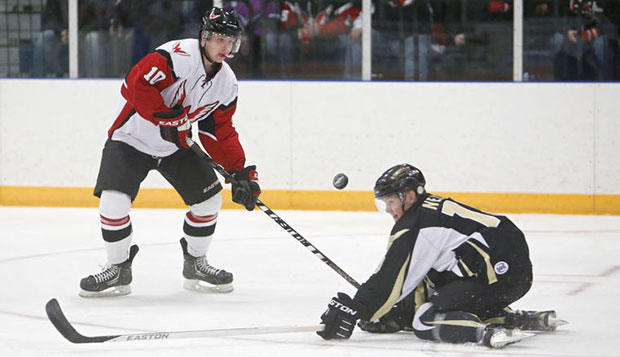 Garrett Nelson shows his willingness to sacrifice his body to block a puck during a game with the Bismarck (N.D.) Bobcats.

Liberty University's latest ACHA Division I men's hockey recruit, Garrett Nelson, began his hockey career as a center, but shifted to defenseman two seasons ago when he joined the Bismarck (N.D.) Bobcats in the North American Hockey League (NAHL).

"My first year was a little hard because I was just learning the position, but this year I took off on the defensive side and really brought up my offensive side," said Nelson, who turned 21 in April. "I like to hit and get in the gritty areas, for sure. I like to block shots and I'm not really timid around anyone of any size."

Nelson, a 5-foot, 10-inch-tall, right-handed defenseman, had looked at West Point and a few NCAA Division III schools before committing to Liberty on Friday. He was scouted by Flames Associate Head Coach Jeff Boettger at a showcase in Minnesota last year and pointed to Liberty by Fellowship of Christian Athletes Hockey National Director Rick Randazzo, who played NCAA Division I hockey at Army before coaching at Navy.

"I think it was the right decision and I'm excited to be here," said Nelson, who plans to study either physical therapy through the Department of Health Professions or economics in the School of Business at Liberty. "I'm really looking forward to the school year and growing my faith and hockey, of course, also. I'm going to take it day by day and see what God has planned for me."

Nelson, who visited Liberty in February, arrived in Lynchburg on Sunday and is sharing an apartment with junior defenseman Ben Hughes, the Flames' head captain.

"Garrett is one of those guys that really showed the kind of heart and work ethic that defined our ‘D' this season," Bismarck Head Coach and General Manager Layne Sedevie said. "He worked hard in the offseason to improve himself and played through injury in the playoffs to help his team, both of which say a lot about him as a player and a person."

Liberty Head Coach Kirk Handy believes Nelson, one of at least a dozen recruits this fall, is the type of player who can spark the Flames as a freshman and carry the torch throughout his career.

"Garrett will add an element to our defense corps that we didn't have before he committed to us," he said. "This is a guy who competes on and off the ice. The guy's a fitness guru and I like that about him. He's also a guy who brings a level of professionalism to the game and his compete level is what I love. He's a fierce competitor and a hard guy to play against. We want to make sure that we have that every night next year. That's going to be a big thing for us."