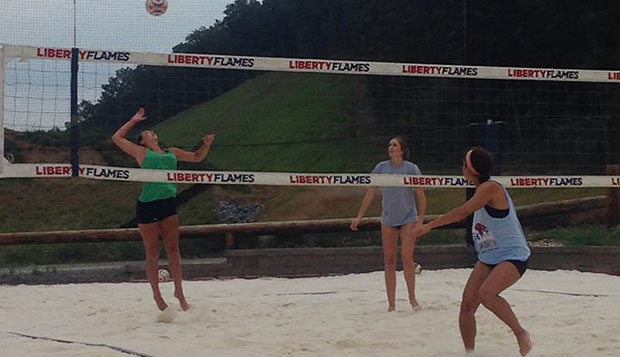 "It was very hot and players had sand socks on before noon because the sand was that hot," Liberty Head Coach Rachel Willis said, noting that temperatures reached into the upper 90-degree range.

"They were off to a really good start and I was really happy with what David and Sam were doing," Willis said. "They were playing really consistently and making adjustments to what their opponents were doing."

However, muscle cramps in Hong's legs became so severe that they were forced to forfeit just four points into their fourth match and eighth game of the day.

The Flames and Lady Flames entered a total of eight tandems into the men's and women's open, AA, and A divisions, which ranged from eight to 16 pairs, mostly from the Virginia Beach area. They gained some valuable experience heading into this Saturday's Wilmington (N.C.) July Adult Series tournament and the July 23 National Collegiate Sand Volleyball Association (NCSVA) National Championships in Santa Monica, Calif.

Junior Caleb Pitcher and graduate Paul Brueckner, Liberty's other duo in the men's open division, lost their first two matches and were eliminated.

On the women's side, graduate Karyl Wiese and senior Morgan Horne lost their opening match and had to wait more than four hours before being eliminated in the second round in three games.

"I thought they were going to pull it out," Willis said. "They weren't playing bad, by any means, but the other team just played a little bit better at the end."

In the AA bracket, sophomore Lydia Smith and senior Brittany Tyree teamed up for the first time and placed second in their pool before defeating the team they lost to in pool play to advance to the semifinals. There, they lost a three-game match to a Virginia Beach pair.

"They had one girl as tall as Lydia, who's 6-foot-2, so they matched up pretty well," Willis said. "It took a while to figure out their team chemistry, but our girls played really well for their first tournament playing together."

The Lady Flames also had two of their three women's A teams advance to the second round of the single-elimination playoffs before losing. Sophomore Lindsay Barber and senior Caroline Bertholino defeated Liberty sophomore teammates Madison Riley and Hannah Hyland in first round of the playoffs, a one-game match to 28.

Willis has finalized the three pairs who will travel to NCSVA National Championships — the women's duo of Wiese and Horne and the men's tandems of Hong and Eisbrenner as well as graduate Kaleb VanDePerre and former indoor volleyball player Nick Williamson, who qualified at the April 30 NCSVA Regional hosted by Liberty, but haven't played together since.