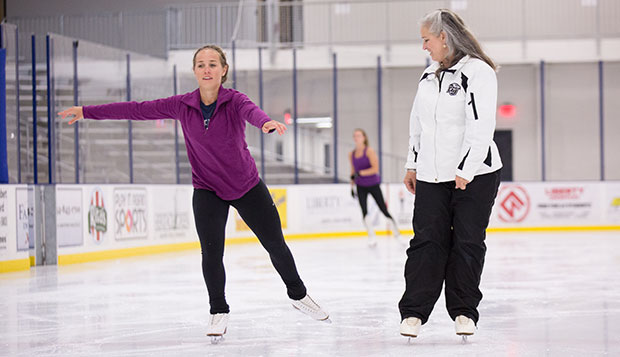 Originally from British Columbia, Canada, where she started ice skating at the age of 4, Liberty University's new figure skating Head Coach Dawn Harter renewed her passion for the sport after relocating from Florida to Virginia in 2001.

When the LaHaye Ice Center opened in 2006, she started as a volunteer coach with the U.S. Figure Skating Learn to Skate program.

"I've worked with the ice rink ever since it opened," said Harter, who replaces Jamie Swyers, Liberty's new director of recreation centers. "As the years have progressed, the responsibilities have increased and my role has changed. Having coached under Tatiana Payne, (the head coaching job) was a perfect fit. It was an honor, not something I was trying to attain."

"She has a very good understanding of what it takes to run the team," Payne added. "She develops strong relationships with the athletes. Every member of our team knows without a shadow of a doubt that Dawn's looking out for them and their best interests."

"We didn't have a lot of skaters at the time, but since then we have attained more and more," Harter said, noting 10 new recruits will be joining the program this fall with an additional 12 already committed for 2017. "With our existing skaters, that brings our figure skating roster to about 25 members."

Between the developmental and competitive teams, the Lady Flames could have as many as 30 skaters this fall, with upwards of 15 competing in the spring Eastern Sectional meets set for Feb. 4-5 at Massachusetts Institute of Technology (MIT), March 4-5 at Liberty, and March 18-19 at the University of Delaware.

Harter has a bright vision for the program, with a five-year goal of seeing the Lady Flames as one of five teams from the Eastern Section to qualify for the U.S. Intercollegiate Team Championships. That event was hosted by national champion Delaware in April and could potentially move to Liberty's renovated LaHaye Ice Center in the near future.

"We're training athletes, but we're also coaching future coaches to infiltrate the skating community throughout the world, shining a light wherever they go," Harter said.

She will accompany rising sophomore Cami Burkhardt and incoming freshman Chelsea Henry to Colorado when they represent Liberty in the Senior Ladies division of the July 28-30 U.S. Collegiate Figure Skating Championships near Denver.

"With the level of skaters we're bringing in, we'll have the possibility of sending five to six skaters to that competition next year," Harter said.

"As far as my role, I will step up more on the administrative side," Harter said. "I enjoy organization, as well as communicating with officials and other coaches."

She plans to maintain the conditioning program and raise the performance standards that Swyers set last season.

"We will continue to utilize the off-ice training Jamie did last year and hold skaters to a standard that helps them perform as athletes," Harter said. "We have the same motivation and expectations this year."

Her immediate goals are to develop chemistry on a team with more newcomers than returning skaters and to see that each member skates to her potential and demonstrates a spirit of encouragement.

"Every time we step on the ice, we want to bring our best and transfer that to our competition," Harter said. "I use skating as a tool to help students grow in their relationship with Christ, throughout their time at the university and their lives. We're a team, we're all united, and when someone's down, the others lift her up."

Tryouts for the Lady Flames will take place on Aug. 28, just a few days after students arrive for the fall semester.