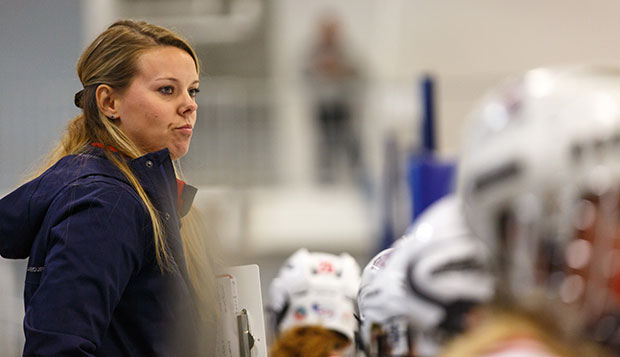 Liberty fifth-year Head Coach Sara Niemi is hopeful the Lady Flames will improve on their 1-8-2 record this season.

Liberty University ACHA Division II women's hockey Head Coach Sarah Niemi took some time to interview with Club Sports Video Coordinator Gabe Henderson about her team's performance this past season and expectations for the fall 2016-17 campaign in this edition of "Coaches Club."

The Lady Flames faced a daunting schedule in their first season competing in a new conference, College Hockey East, and didn't post an impressive record, but did keep their three-season unbeaten mark against Montclair University intact.

"Obviously, we want to win, but as a coach, I try to focus on my players as student-athletes," Niemi said. "We played some nationally ranked teams and we got some goals, some points, a lot of experience against teams like that, with very strong, talented players."

She is optimistic about the future of the program, building around a strong incoming recruiting class.

"We have a lot of interest coming to the program, so it's nice to see a lot of girls wanting to play hockey," Niemi said. "This coming year, we do have a goalie and a defenseman who are very strong athletes and we're really looking forward to having them here. I feel like their presence is going to continue to motivate and help teach those girls on our team who don't have the experience playing the sport. But we also have a lot of returning players who have a lot of experience. It's just going to be important to make sure that our team chemistry stays strong. I'm really looking forward to it."

One of the top returning players is graduate defenseman Kaitlyn Scales, who will serve as one of the team's captains.

"I'm really looking for her to really help lead and to help show and mentor other girls how to become leaders and how to step up, whether it's on ice or off ice," Niemi said. "Me being the only coach, it's hard to oversee and mentor 18 different girls. I really do rely on my leadership a lot. We do have a lot of girls we're going to push up into leadership positions. They're a key to helping me run the team."

The Lady Flames will play their first eight games next season at the LaHaye Ice Center, starting with a two-game series against Miami of Ohio on Oct. 8-9.