Cockburn to skate for same pro team as Byron in Sweden 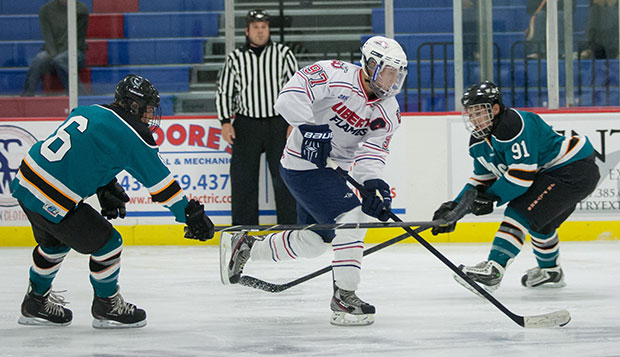 Brandon Cockburn is Liberty's all-time leading scorer at the Division III level with 136 goals and 98 assists in 106 games.

"It did come out of the blue a little bit, but it's always been something I've wanted to do," Cockburn said. "Last year, I was pursuing different options, talking to a team out in Australia, but I didn't have an agent. This year, Cary's agent got in contact with me. It makes it a lot easier when you have somebody speaking on your behalf."

Having spent a year away from playing competitive hockey, Cockburn will train with Byron out of the LaHaye Ice Center starting in early July.

"I plan on being on the ice as much as I can, in the weight room building my cardio-vascular fitness, hitting the weights, trying to get some muscle and trying to get myself back in game shape," he said. "I'm going into it with the mentality that I've got to work extremely hard."

Cockburn served as a DIII team captain throughout his five-year career with the Flames and as an assistant coach under LFSN broadcast partner Rett McGibbon this past season. McGibbon doesn't expect the transition to the professional game to be that large a leap for Cockburn.

"Brandon could have played Division II at Liberty," he said. "He played a game at the Division I level and didn't look out of place, so that opened my eyes a little bit to see that. He sacrificed of himself to be the DIII team captain for five years and once he came on the scene for us, he helped take the program to another level with his professionalism. He was a great leader for us, a great testimony of what a leader at Liberty should look like, with how sound in his faith he is. To see God bless him and have the opportunity to go play in Sweden, I couldn't be happier for him."

For his five-year career, Cockburn was the all-time leading scorer at the DIII level by a long shot, scoring 136 goals and distributing 98 assists (234 career points) in 106 games played, an average of 2.2 points per game. He doesn't anticipate being as prolific a scorer in Sweden, but hopes to maintain his consistent style of play and showcase his leadership skills on and off the ice.

"I'll have a different mentality going into a team like this," he said. "I might not be viewed as that guy (go-to scorer) right away. I'll focus on being the kind of player that the coaching staff needs me to be, which may be a physical grinder sort of guy."

He said coaching for a season was helpful in developing his maturity as a player and an even better understanding of the game and the team concept.

"Seeing the game from a different perspective kind of helps, knowing what it takes for a whole team to be successful, instead of maybe one guy," Cockburn said. "As a coach, you're trying to get the most out of your players, to be a motivator. Now that it's time to be on the opposite side, as one of the players, I can respect the coaches and try to give them the effort that they're looking for."

He expects to be one of the older players on Viking HC and will look to take on a leadership role.

"Cary and I want to represent Liberty and what we believe and just be a good witness to the guys on the team," Cockburn said. "That's what it's all about. We want to do well, compete, and win hockey games, but at the same time it's a great opportunity to be a light to a bunch of guys over in Sweden."

Cockburn, who's from Mississauga, Ontario — about a 45-minute drive from Toronto, Byron's hometown — played on the same team as Byron for just one season, his junior year in 2013-14.

"I'm really looking forward to having that opportunity again," he said, noting that Hagfors is located three hours north of Sweden's capital, Stockholm. "It's a lot further north than where Cary and myself are from, more like the Northwest Territories (of Canada) or Alaska. We're going to have to adjust to the cold, but it will all be part of the experience."