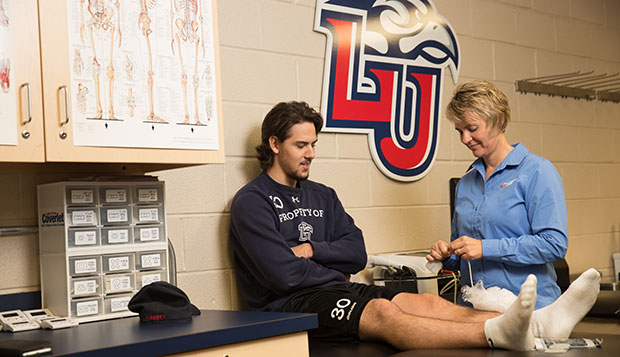 Club Sports Athletic Training Coordinator Angie Witt tends to one of the student-athletes she helped rehabilitate from an injury last fall.

Over the past five years, Liberty University's Club Sports athletic training department has grown to meet the medical needs of an ever-expanding body, which now has well over 500 student-athletes competing on 35 distinct sports teams.

When she started back in 2010, Club Sports Athletic Training Coordinator Angie Witt had only had the capacity to travel with Liberty's ACHA Division I men's hockey team on road trips. Now, with two full-time trainers and three graduate assistants, her staff is able to serve as mobile medics for the DI men's and DI women's hockey, men's lacrosse, and wrestling teams, covering all of their away competitions as well as the DII men's hockey team's national championships in West Chester, Pa.

"The growth and improvement of our department within the past five years is huge," Witt said as she and three members of her staff, including Assistant Coordinator Kyle Swanson, prepared to travel to next week's National Athletic Trainers Association's 67th annual symposium in Baltimore. "It's amazing how God has blessed us, with the administration backing us and giving us what we've needed to improve our department."

Last year's renovation of the LaHaye Ice Center provided additional space for an athletic training room equipped with electric stimulation therapy and ultra sound machines as well as other modalities.

"We have so much more than we had before, with the equipment we've been able to acquire over the past couple years," Witt said. "We've made great strides in the past five years in the coverage and high-quality services we provide to our students. Now, we're a program that other schools' club sports athletic training programs are looking to model themselves after."

Within the past year, the Club Sports department has made all of its student-athletes' medical records electronic so athletic trainers can easily access athletes' medical histories with Internet-based software from any location.

"Making everything available electronically has definitely increased our productivity," Witt said. "Every time a doctor sees one of our student-athletes, we can scan in and save the X-rays and test results to our records."

The athletic training department maintains a positive working relationship with the strength and conditioning staff coordinated by Chris Kerr and Shane Short. Those bonds are strengthened by having the training room adjacent to the weight room in both the LaHaye Ice Center and the state-of-the-art strength and conditioning and athletic training facility located across the back parking lot.

"They work well with us and if athletes are injured, they'll alter their workout program to meet the needs of their injuries, to give them a recovery workout that's best for them," Witt said.

She has treated fewer traumatic injuries that require surgery in recent years and attributes that directly to the strength and conditioning program preparing athletes for the rigors of their respective sports.

Still, the athletic trainer must always be ready to respond when serious injuries do occur, diagnosing the nature and severity of the injury and administering first aid.

"The ultimate goal is to have as few injuries as possible, but (when) our athletes (do) get hurt, we want to get them back on the playing field as soon as possible with as minimal procedures as possible," Witt said. "We send them to our team physician if necessary and we rehab them here in the clinic."

The busiest months for her staff are October and February, when they will see as many as 500 student-athletes from a variety of sports in the heat of competition.

"Most of our teams are in season (by October), which drives the numbers up," Witt said. "In February, teams are gearing up for national tournaments and they're beaten and banged up and need to make it through their regular seasons before they can get some rest."

Swanson said rehabilitation involves psychological as well as physical therapy and that it is important to establish personal relationships with patients.

"One of the greatest aspects of athletic training is you're finding people at their worst, when they've sustained a knee sprain or a broken arm," he said. "They're not playing and sometimes, they almost feel disconnected from their team, so you're almost getting them at their lowest point, and you're able to connect with them and build that relationship as you're rehabbing them and getting them back to playable conditions."

Both Witt and Swanson approach their work at Liberty as medical ministry.

There is no greater payback than seeing the student-athletes they care for return to top form and excel.

"Club Sports is unique as far as they're non-scholarship athletes, so they just want to compete for the fun of competing," Witt said. "We want our athletes to compete to their best potential, so we want them to work hard. When we see an athlete who has struggled through an injury go and have an amazing game or competition, that's our reward." 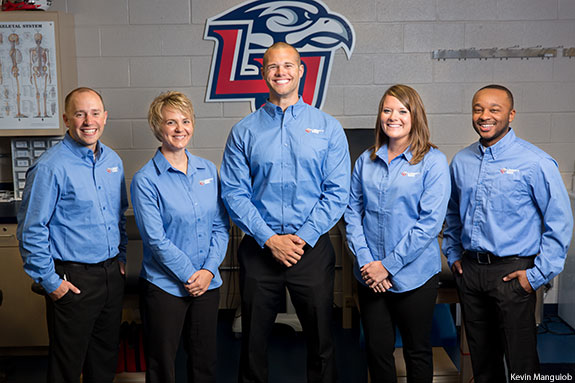