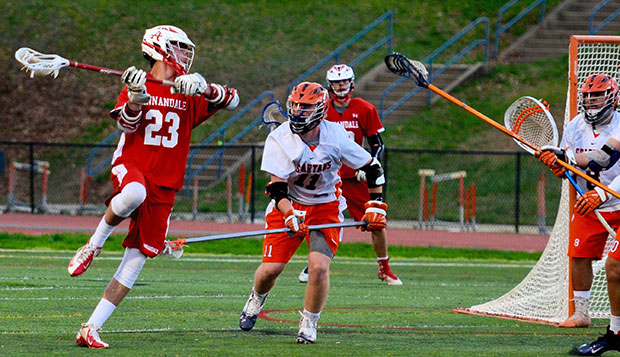 Caleb Britton (left) ranked among the top scorers at Annandale High School, where Liberty all-time scorer Ryan Miller graduated from in 2012, in each of the past three seasons.

Lacrosse history runs deep in the Britton family, starting with patriarch Ed Britton — who was a captain on the Naval Academy's team during his senior year in 1958 — and his two brothers who played at the University of Maryland, an NCAA powerhouse in the sport.

Liberty University has become a big part of that family tradition, with a total of six of Ed Britton's grandchildren playing on the Flames men's and Lady Flames' women's teams this past spring or starting this fall.

Last season, there were two sisters — Kallie and Abby Britton from Overland Park, Kansas — and a cousin — Paige Britton from Annandale, Va. — on the women's squad.

"Lacrosse has been in our blood," Caleb Britton said. "The cool aspect about having close family on the team is you know how each other are on and off the field, so the chemistry will be there."

The Brittons also have strong family connections to the Fellowship of Christian Athletes' lacrosse programs. Carter's and Caleb's father, Steve, coaches the FCA team based in Northern Virginia and their uncle in Kansas, Dan, is head of FCA's international lacrosse program.

This summer, Caleb is serving as a huddle leader at an FCA camp in Gettysburg, Pa., coaching a group of younger players in practices and leading them in Bible studies.

Caleb and Carter were teammates on the Atoms for Caleb's first three years at the Northern Virginia high school and steadily rose up the ranks to assume added responsibility as his career progressed.

"As the seniors graduated, I took on more of a leadership role, leading the offense, settling things down when we needed to, and going to the cage and putting pressure on when the time was right," Caleb Britton said. "For the past three years, I've been a starter and for my junior and senior year, I was a team captain."

The projected industrial engineering major expects to challenge for a starting role at Liberty on a similar timetable.

"I just really hope I'll be able to work my way into the lineup wherever I can as a freshman and by my sophomore and junior seasons be someone that can be relied on (as an everyday player)," he said. "My speed has developed since my freshman year, as has my shot. I was more of an inside finisher as a freshman, but as I had to get away from double coverage this year and last year, I developed more of an outside shot."

Caleb Britton may not be the next Ryan Miller, a former teammate of Carter's at Annandale who spent his summers playing on FCA's national team in Lake Placid, N.Y. But he will help fill the void left by Liberty's all-time leading scorer who graduated this spring along with the entire starting midfield.

"He's a tall, athletic guy who's going to come in and fill some of the gaps," Flames Head Coach Kyle McQuillan said, noting that Eli Britton will be one to watch as well in preseason tryouts. "Both have been a part of our (fall) recruiting combines, though we've been able to see Caleb play a little more often with him being an East Coast guy. Every year, we've got recruits and people we think can come in and make an impact and others who surprise us. Both have potential on the attack side of the ball. It'll be interesting to see how much that bloodline contributes to the chemistry of the team."

"I hope that works out because we're two different styles of attackmen, and I hope we'll work well together," Caleb Britton said.

Carter Britton played more of a reserve role as a freshman this spring, when the Flames were especially deep at the defensive position. But he showed promise during his limited time on the field and will undoubtedly receive more next spring.

"He proved to us as a coaching staff that he was one of our more consistent defensive players," McQuillan said. "He has all the intangibles. In man-down defensive (situations), he's a reliable option on defensive side of the ball."