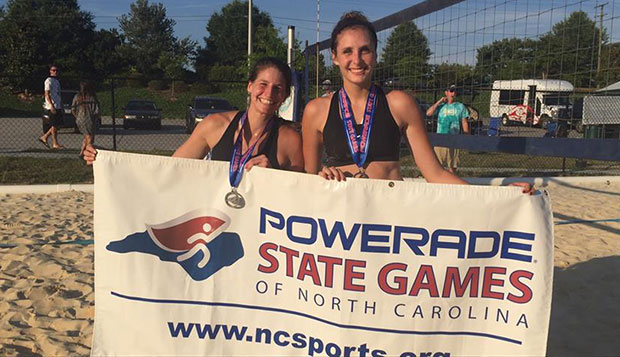 The Flames and Lady Flames entered teams in all four divisions — Men's AA and A and Women's AA and A — and placed second in every division.

"It was a pretty good finish for Liberty beach volleyball," Head Coach Rachel Willis said. "We did really well. We went to three games in three of the four finals."

"They were doing really well," Willis said, noting that they were leading Game 1, 18-15, before one of their opponents suffered a cramp that forced him to take a 10-minute delay to recover. "They ended up losing the game, 21-19, and came back and won really solidly in Game 2 but lost a close Game 3."

In the Men's A division, rising junior David Müller and Justin Bias finished second to Chris Moore and Brandon Brooks.

"This was their first tournament playing together and they played really well," Willis said. "I don't think they dropped a set until the finals. The field was fairly strong all the way across the board. They were just working really hard."

"It was very well played by both sides," Willis said. "You can get that any time you have opponents who know each other, so that was a really great match."

That sent the Lady Flames' tandem, which finished 5-1 on the day, to the final against Katie McCullough from UNC Wilmington and Hailey McFadden from Wake Forest.

"We were also excited because we played some really good talent in the women's AA finals," Willis said, noting that it was a competitive 10-team bracket. "Lydia played so well in the first game and we just trounced them, 21-16. They served Lydia every ball and every ball Lydia would hit it back so hard that the other team didn't know what to do with it. She really figured out this tournament that when she swings, nobody can defend her. So we're really excited to see what she does with her partner (rising senior) Brittany Tyree for the rest of our tournaments this summer."

In the Women's A division, Liberty rising seniors Gabrielle Sunseri and Madison Malat defeated rising sophomore teammates Hannah Hyland and Madison Riley in the semifinals. Sunseri and Malat finished runner-up to undefeated Lisa Lysik and Corrine Lewis after taking their opponents to three games for the first time in the tournament.

"They put a lot of plays together and a lot of them came off some really great diving digs," Willis said. "They just played really solid defense, with tough serving and really good all-around play. Gabby had some strong cut shots that were almost impossible to defend because you don't see them coming. Madison has some height and she uses that to her advantage and sometimes gets (the second) ball over and she was able to score a lot of points on that as well."

Willis said she will know by the end of the Virginia Beach Big Money tournament on July 9 which men's and women's tandems will travel to Santa Monica, Calif., for the National Collegiate Sand Volleyball Association (NCSVA) National Championships on July 23, with the rest competing in the Commonwealth Games over the same weekend.